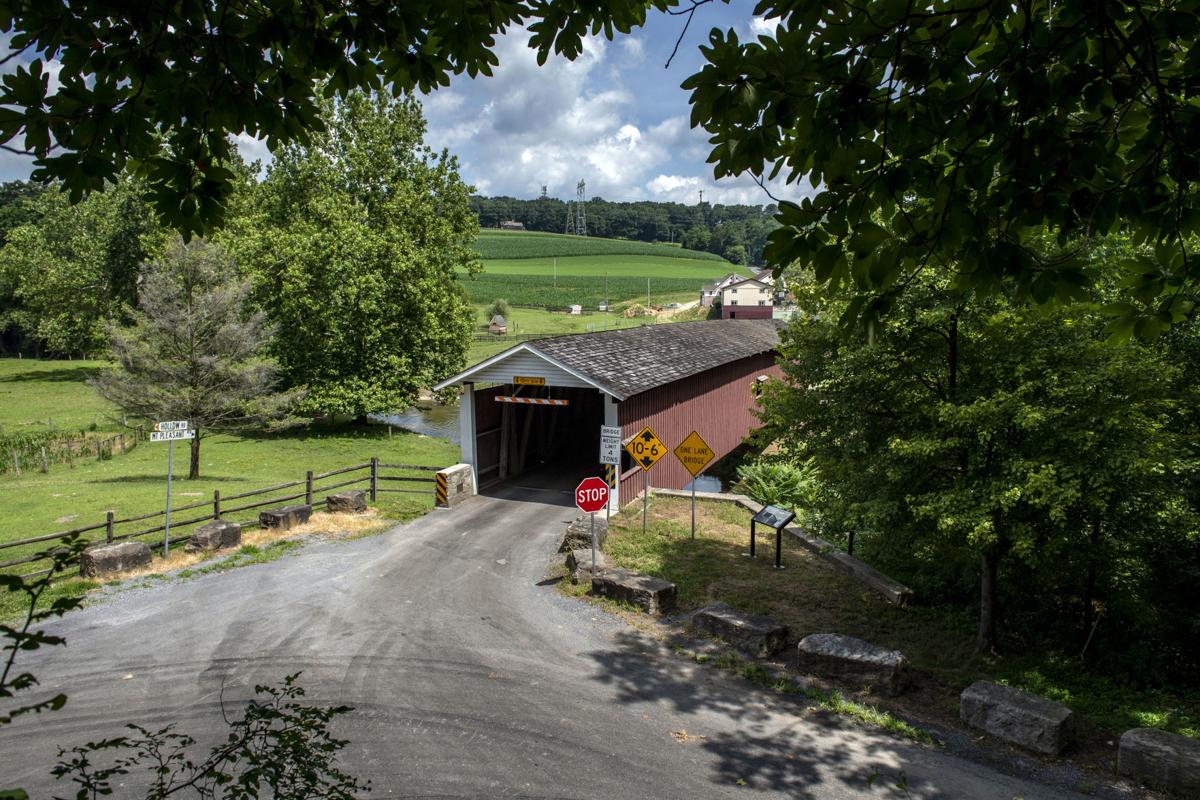 Jackson's Mill Covered Bridge, seen here along Mount Pleasant Road in Quarryville, Wednesday, July 10, 2019. The bridge is one of the longest in the county, at 143 feet. 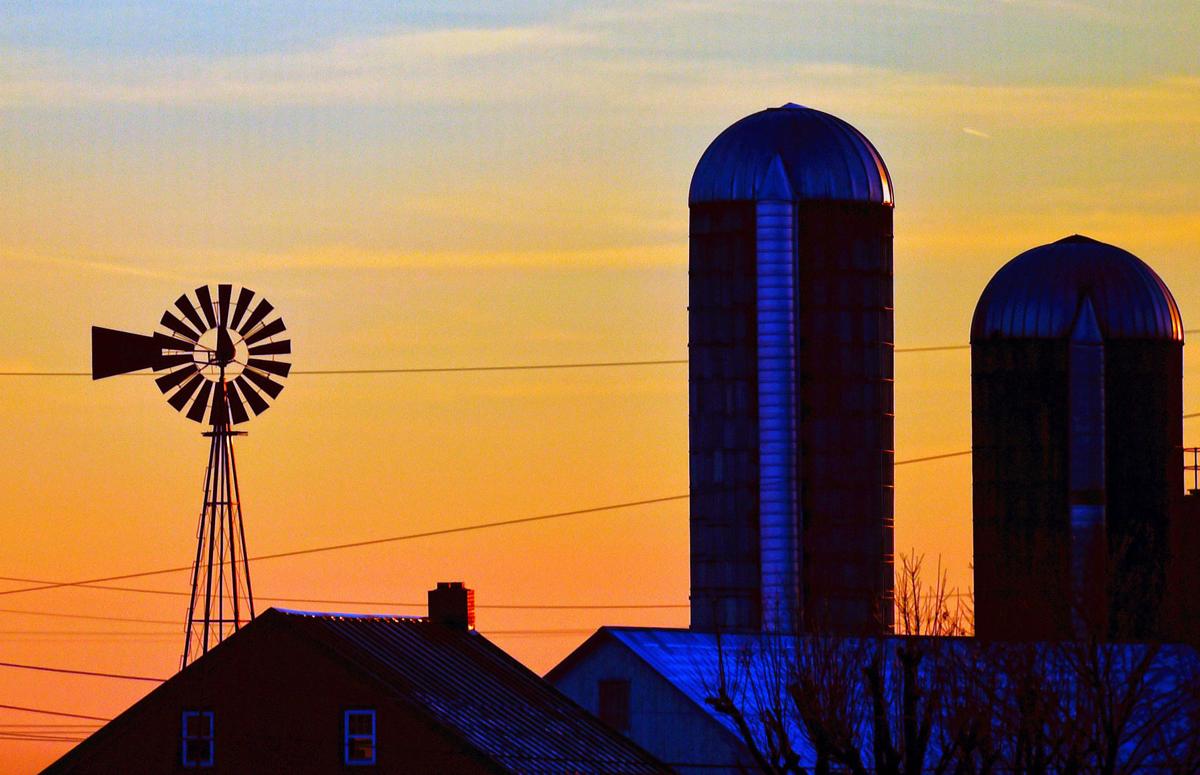 A windmill and a silo are silouetted during sunset on a cold evening on a farm on Farmersville Road in West Earl Twp. Wednesday Jan. 22, 2020. 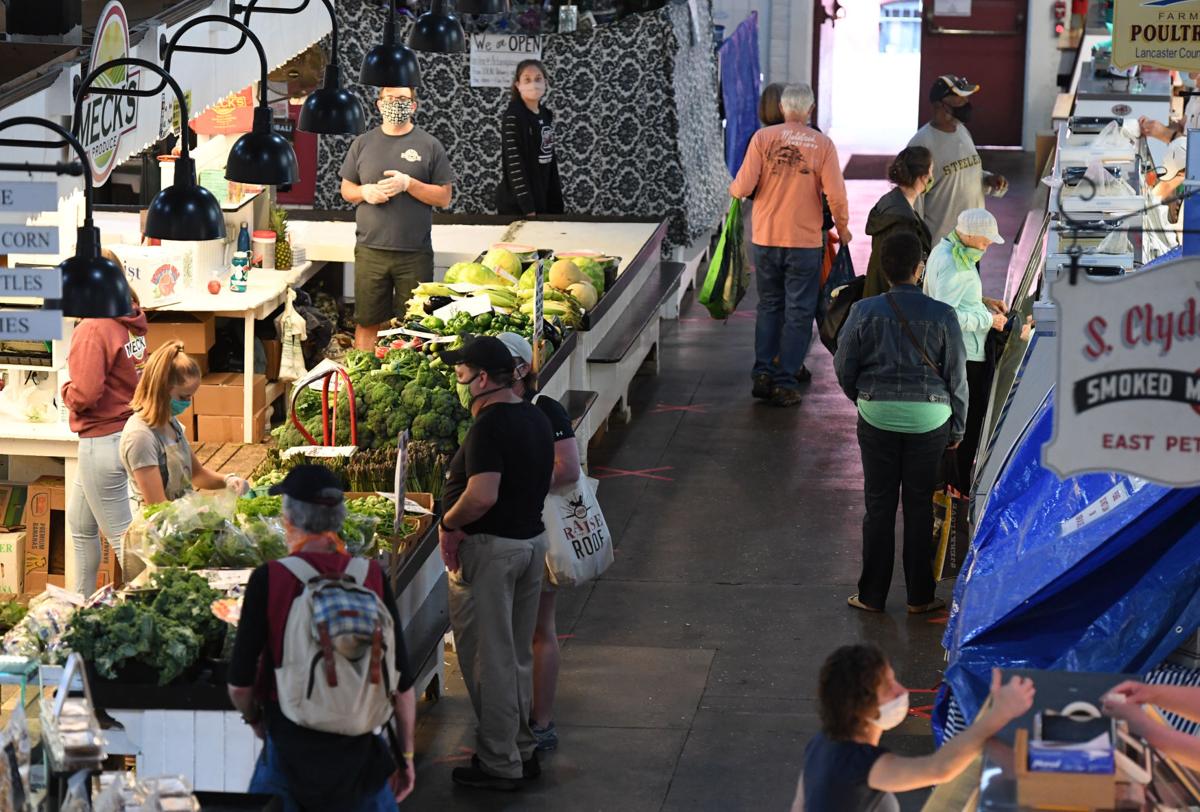 People shop at the Central Market during the reopening of the county at in Lancaster on Friday, May 15, 2020. 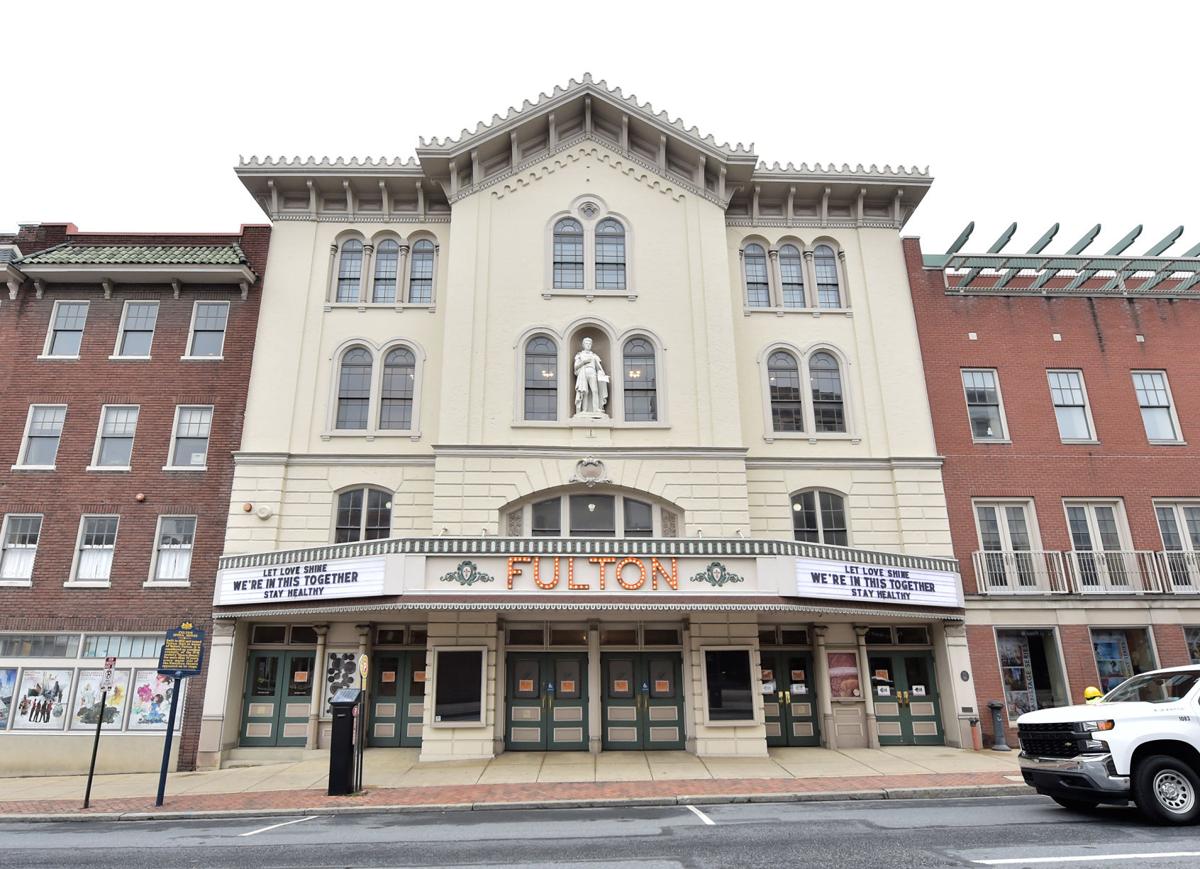 The Fulton Theatre is shown shortly after it had to close temporarily in the spring because of the COVID-19 pandemic. 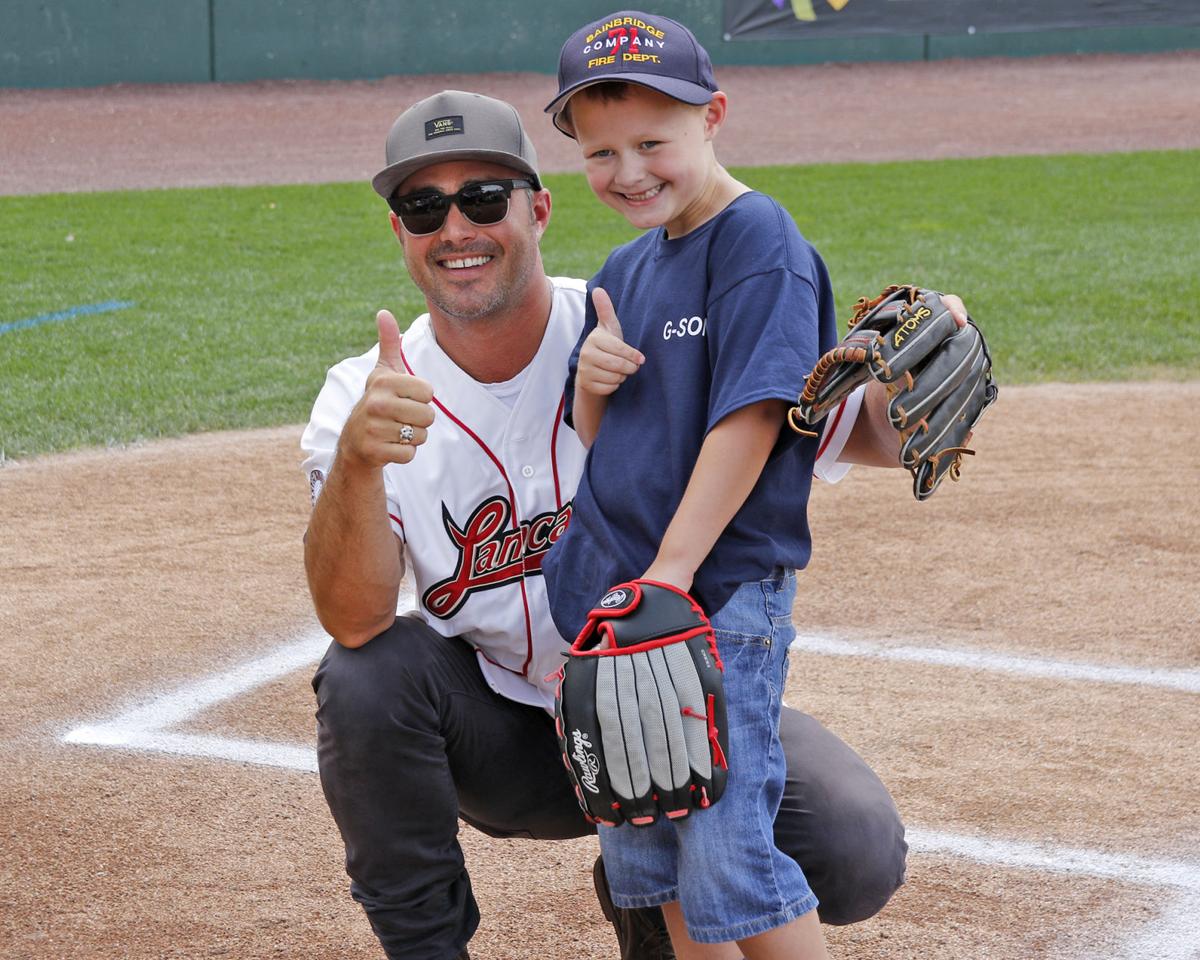 Tyler Mohr got to pose with Lancaster native and "Chicago Fire" actor Taylor Kinney after he threw his first pitch to him before the start of the Barnstormers game at Clipper Magazine Stadium on Sunday. 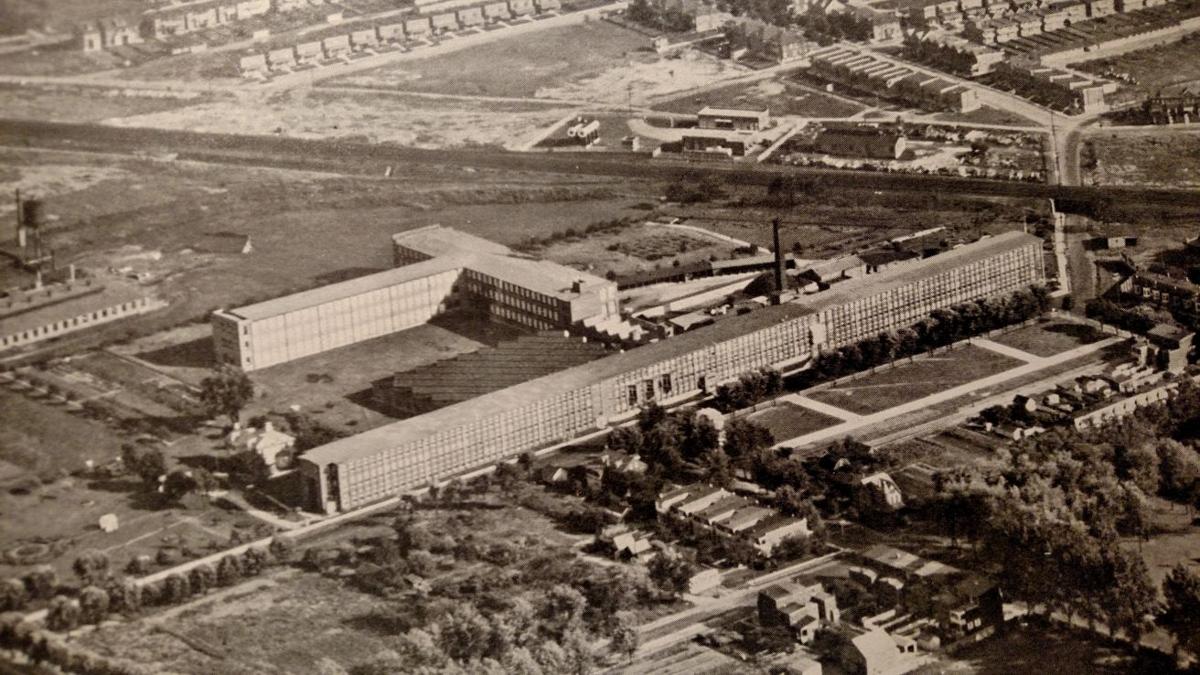 This aerial view, looking south toward Lancaster city, shows the Stehli silk mill on Martha Avenue. It is pictured in the 1929 book, "Mills of the Stehli Silks Corporation." 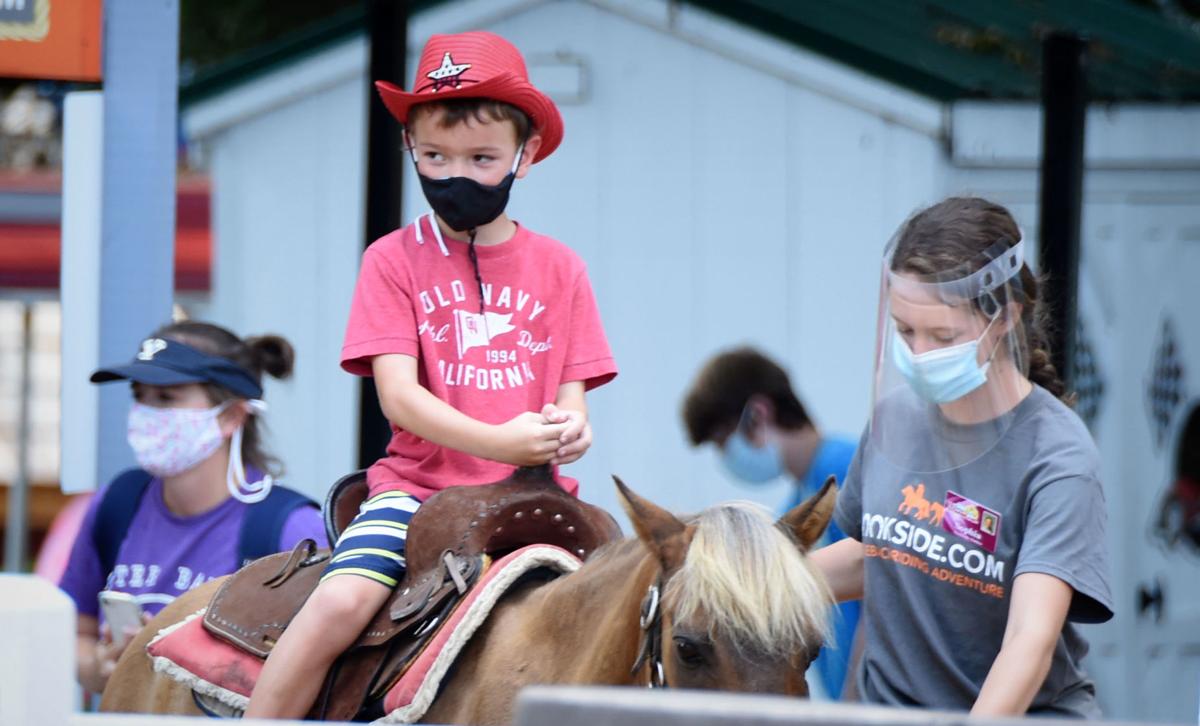 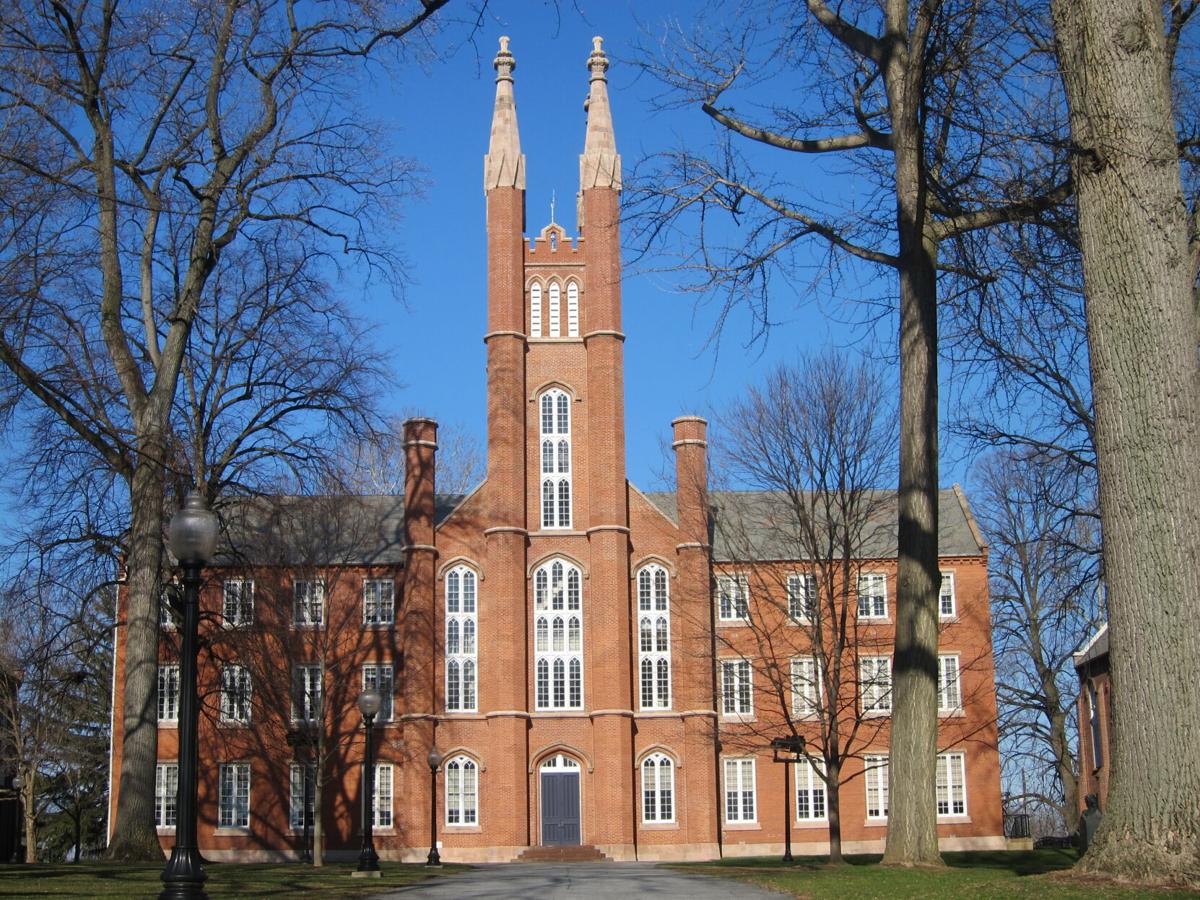 One of the earliest examples of Gothic Revival architecture in Lancaster County is Franklin & Marshall College’s Old Main and its companion buildings, designed by Baltimore firm Dixon, Balbirnie & Dixon between 1854 and 1857. The two- and three-story brick and sandstone structures embody the classic details associated with Gothic Revival architecture: extreme verticality, lancet windows and louvers, battlements and finials. 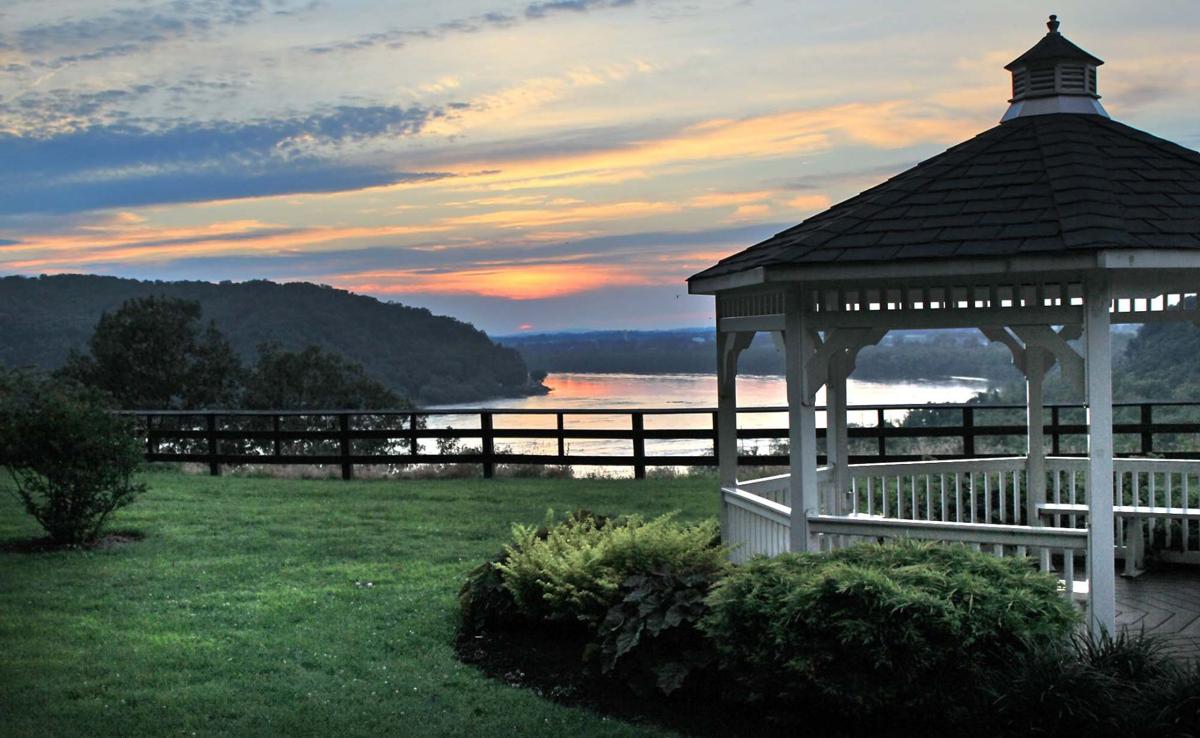 The Breezyview Overlook gazebo at Chickies Rock offers a beautiful view of the Susquehanna River. 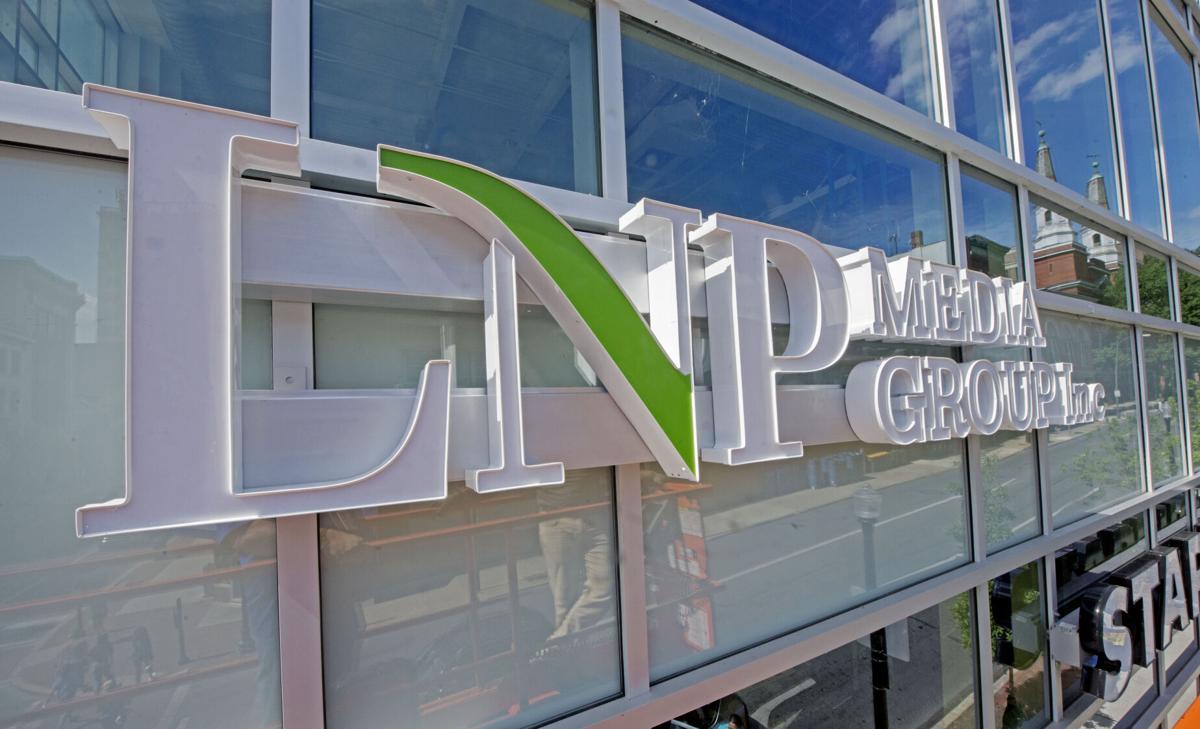 Workers from Signature Signs installed the LNP Media Group sign on the Orange Street side of 101NQ Monday, June 15, 2020. 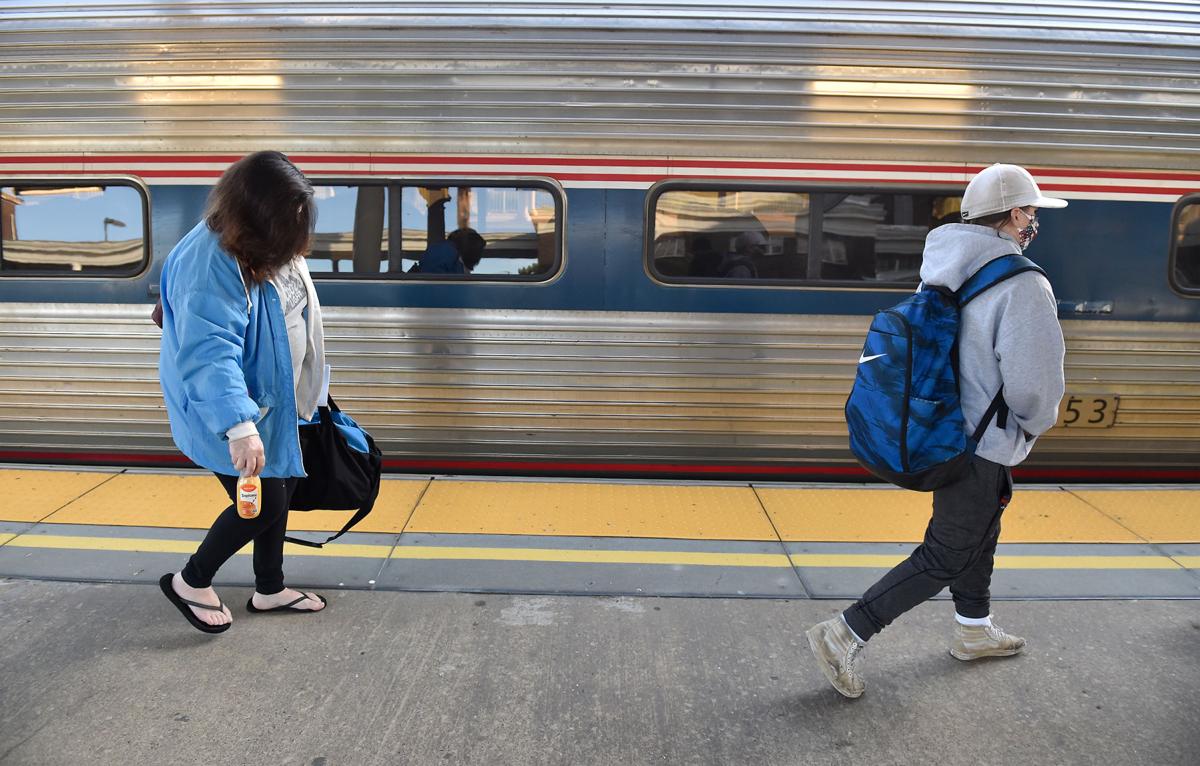 Several people at the Lancaster Station rode the 629 was one of the first trains to offer service to Philadelphia's 30th Street Station on the day that rail service was restored during Covid-19 on Monday, June 1, 2020. 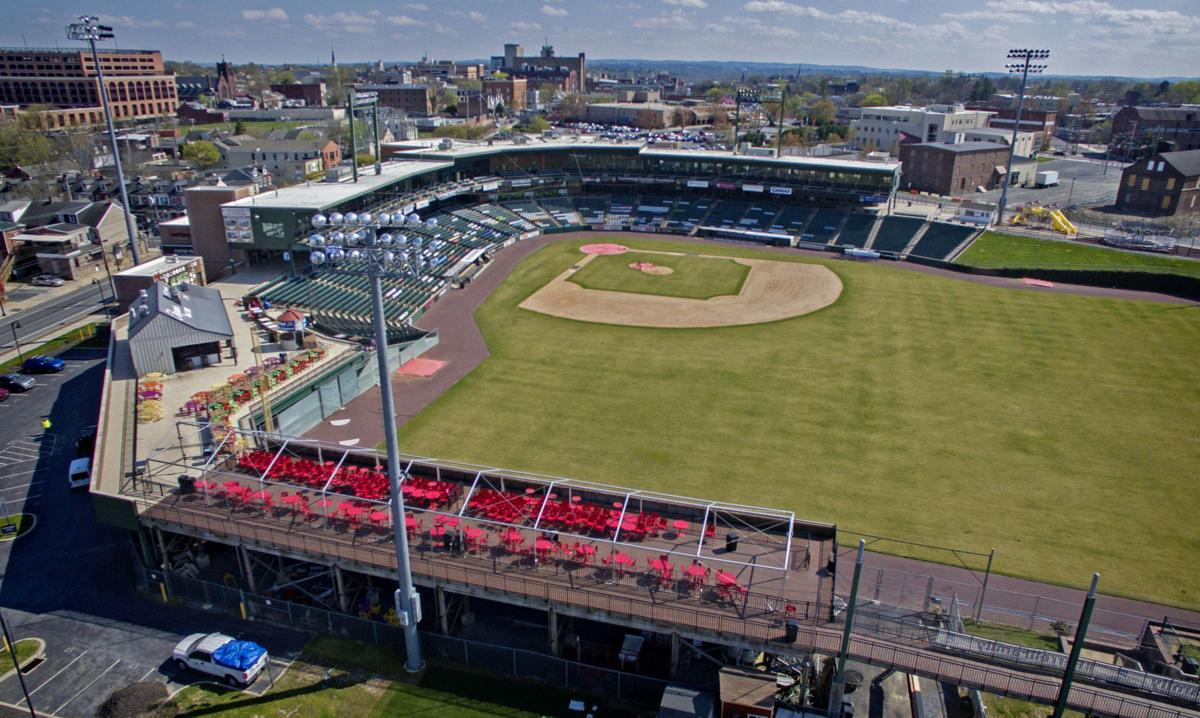 This aerial view of Clipper Magazine Stadium 650 N. Prince St. in Lancaster city Wednesday, April 15, 2020. The Lancaster Barnstormers would normally be getting ready for their season which has been put on hold because of the COVID-19 pandemic. 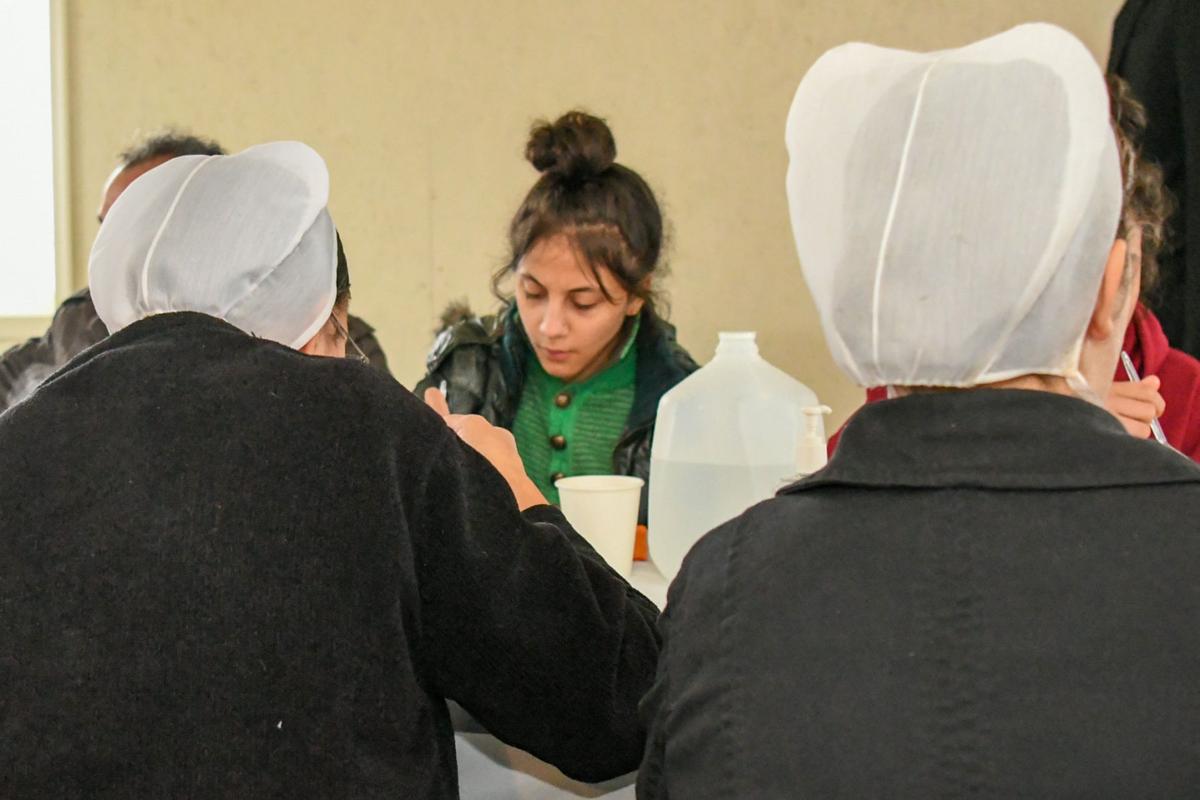 An only-in-Lancaster meal in December 2019 brought Amish and refugee families together on the farm where "Witness" was filmed. Amina Khilo is a teen and Syrian refugee living in Lancaster.

It’s been a tumultuous year.

But despite all of 2020’s challenges, there’s still a lot to be thankful for this Thanksgiving.

Need proof? Look in your own backyard.

Here are 13 reasons to be thankful you live in Lancaster County.

Where else can you have breakfast in a hip downtown, take a short drive to a scenic hike and pass Amish buggies traveling through rolling plains on your way home? Plus, we get to bask – and fish — in the glory of the Conestoga and Susquehanna rivers. If you’d like to head into the mountains, just head down to Chickies Rock. Looking to head into the woods? There’s Tucquan Glen and Middle Creek. Our landscape is rich, scenic and leaves little to be desired, and you don’t have to blow a tank’s worth of gas to enjoy it all.

Our county’s beauty attracts people from all walks of life. There’s the Plain community, which has called Lancaster home for centuries. There’s a large Hispanic population, particularly in Lancaster city. And there are newer transplants as well, from young professionals to those who choose to retire here, as well as refugees from Somalia, Myanmar, Kenya and beyond. Our modest county exemplifies the idea of the American “melting pot.”

'I love this country': 28 new citizens from 12 countries take oath in Lancaster ceremony

If you live in Lancaster and have had a friend visit you, it’s likely you’ve given them this advice: Bring stretchy pants. Visitors will need them, because our food scene is rich and diverse enough to rival any major metropolis. We have access to fresh and bountiful produce thanks to our county’s farmers, which you can purchase at Central Market, the country’s oldest continually running public farmer’s market. Our buffet game can’t be beat, from the beacon of butter that is Shady Maple Smorgasboard to Route 30 staples like Miller’s. There’s no shortage of award-winning and interesting restaurants and coffee shops, and there are made-in-Lancaster classes like Sturgis and Hammond’s Pretzels to Long’s Horseradish and Kunzler hot dogs. Show us a better place to fill your plate.

After you fill up on dinner, there’s a rich performing arts scene to enjoy in Lancaster County – many places we miss visiting since they temporarily closed due to the pandemic. There’s Fulton Opera House, Ephrata Performing Arts Center and Dutch Apple Dinner Theater, among others, for the theater-lovers. There’s American Music Theatre, Tellus360, Phantom Power and a soon-to-be-rehomed Chameleon Club for music fans. And we’d be remiss to not mention Gallery Row, with art galleries that make big cities jealous. Celebrities have taken notice too, as everyone from Taylor Swift to David Byrne chooses Rock Lititz to refine their productions before embarking on world tours.

If you want to see these arts organizations stick around, consider supporting them through their adjusted programming. American Music Theatre’s eight-part virtual holiday performance, “Home for Christmas,” is available for streaming on amtshows.org. With LanCarolers, Prima Theatre is putting carolers on a trolley to spread socially distanced cheer. And Ephrata Performing Arts Center will release “Santa’s Surprise Party” on its YouTube page today, starring Ed Fernandez as Mrs. Claus.

Actors Jonathan Groff, Taylor Kinney and Eliseo Roman, professional figure skater Johnny Weir and former “Saturday Night Live” castmate Kristen Wiig all were born or spent their formative years in Lancaster County. And they haven’t forgotten their roots – Kinney still lives in the county and is a partner in Zoetropolis Cinema Stillhouse, Groff and Roman regularly donate their time to local causes, and Weir spoke of his time in Lancaster on a recent episode of “Dancing with the Stars.”

6. A place for sports fans

If sports are more your thing, we have plenty of professional athletes from Lancaster: Olympian Barney Ewell, baseball Hall of Fame pitcher Bruce Sutter and Dan Kreider, who won a Super Bowl ring with the Pittsburgh Steelers in 2006. But those famous faces aren’t the only reason Lancaster is a great place to be a sports fan. We’ve got Spooky Nook Sports, the largest indoor sports complex in the country, and Clipper Magazine Stadium, where the Lancaster Barnstormers play, as well as excellent high school sports programs.

With the 2020 Olympics postponed, here's a look at Barney Ewell, Lancaster's Olympic star of 1948

Lancaster is also a great place to be a history buff. You can tour a presidential homestead at Wheatland thanks to James Buchanan. Revered architect C. Emlen Urban was born in Conestoga and is to thank for some of Lancaster city’s architectural wonders like the Hager building. And Thaddeus Stevens, a U.S. House Representative who fiercely opposed slavery, decided to call Lancaster home, where he was elected to Congress in 1848. Plus, we were capital for a single day on Sept. 27, 1777, when our city served as host of the Second Continental Congress.

It's Capital Day: Lancaster was capital of the American colonies for a day in 1777

9. A great place for families

The excellent schools aren’t the only reason Lancaster is a great place to raise a family. There’s no shortage of kid-friendly attractions that other families travel hours for, from Strasburg Rail Road to Dutch Wonderland, Lancaster Science Factory and the North Museum.

Should you ever get the itch to leave Lancaster for the day, New York City, Philadelphia, Baltimore and the Jersey Shore are all accessible easily by car. Rather enjoy the view? Then just hop on the Amtrak in Lancaster city. Lancaster’s positioning makes it easy to enjoy other cities, but we’re willing to bet you’ll miss it enough to be happy when you return.

OK, we may be tooting our own horn here, but it’s pretty remarkable to live in a place with a newspaper that has 226 years of history. In a time when local newspapers are suffering, LNP | LancasterOnline continues to grow online subscriptions. But this is a place where many people still enjoy reading their print newspaper too, and for that we’re especially thankful.

Everyone knows we’re the best. No, seriously – Lancaster is always ending up on “Best-of” lists by national news outlets. National Geographic touting our home as a perfect fall getaway earlier this month. U.S. News & World Report named Lancaster County the third best place to retire. In 2018, Forbes ranked us as a top-10 ‘coolest’ place to visit in the U.S. But please, just don’t call us the new Brooklyn. We’re too cool to live in another city’s shadow.

Lancaster County is a perfect fall getaway, even in a pandemic, says National Geographic; here's why

What’s better than being the best? Being kind, of course. During the course of the pandemic, Lancaster County residents have shown their capacity for goodwill and helping others. Arch Street Center continued to serve hearty lunches to the needy – 10,000 lunches, to be exact, over the course of the pandemic. Mask-makers of all ages took to their sewing stations to help protect us from the coronavirus. And we tried our best to keep each other’s spirits up, from participating in “teddy bear hunts” to make our littlest residents smile to people like Rohrerstown’s Michael Luckenbill playing bagpipes nightly for his neighbors during lockdown. Lancaster’s got a lot to offer, but we think it’s the people that make it truly special.

Lancaster County is a beautiful place to live.

WHAT IS THIS TOOL?

'We can continue to serve our community': Lancaster County churches opt for drive-thrus to provide Thanksgiving meals

The COVID-19 pandemic has made planning a 2021 season challenging for local theater companies.

The inspiration for this story came from the pandemic we are facing today, as well as a story this column carried some time ago about the poli…

Ask the pediatrician: How has pediatrics changed over the past 50 years? [column]

During pandemic, many deer camps not the same this year

For only the fourth time in 51 years, Bill Libhart, of Marietta, didn’t make it to deer camp in Potter County for the opening of another gun s…

8 ways to give in Lancaster County this holiday season

With the 2020 holiday season landing squarely amid a surging pandemic, some of Lancaster County's charitable organizations have adjusted their…

Older adults have needs, of course.