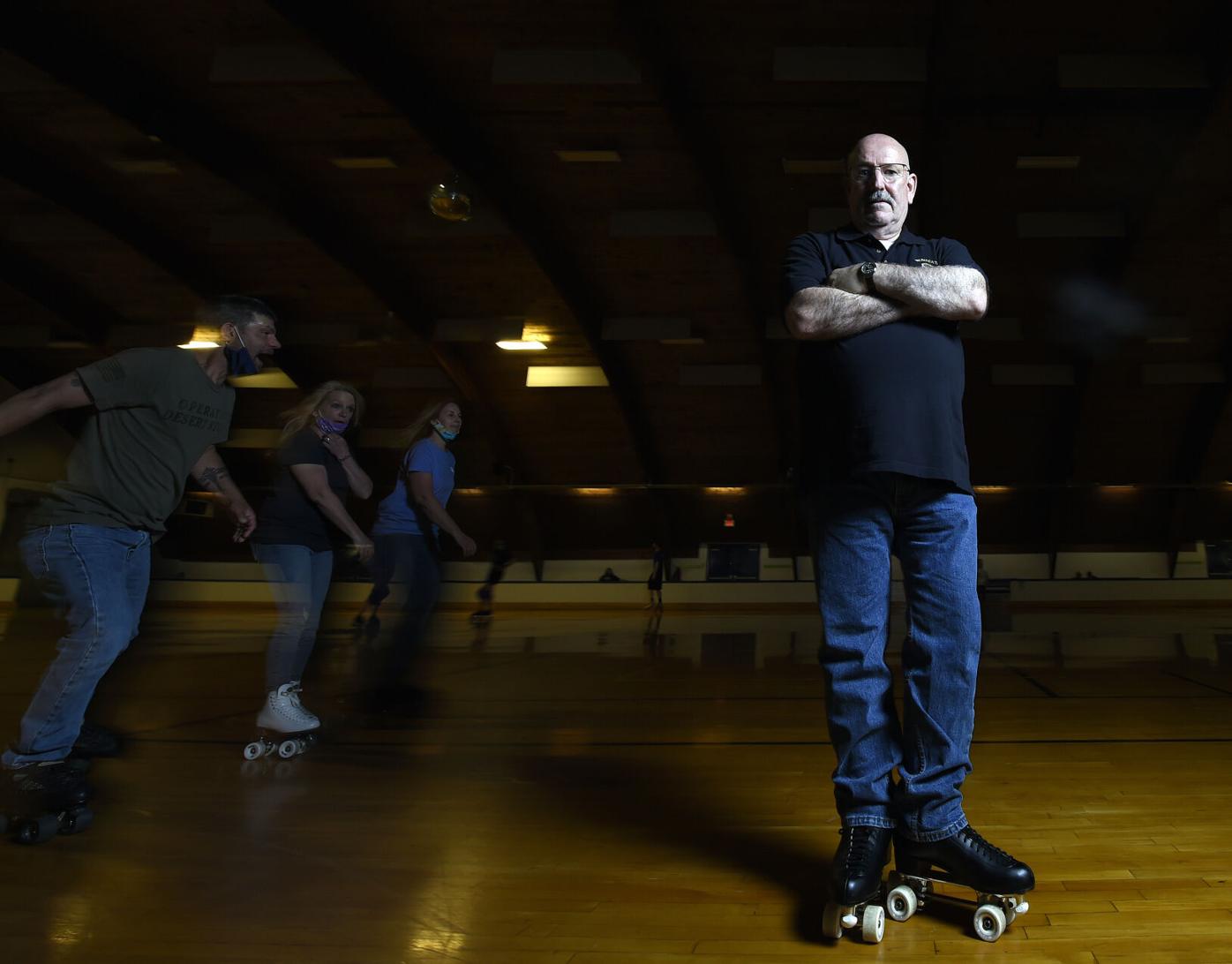 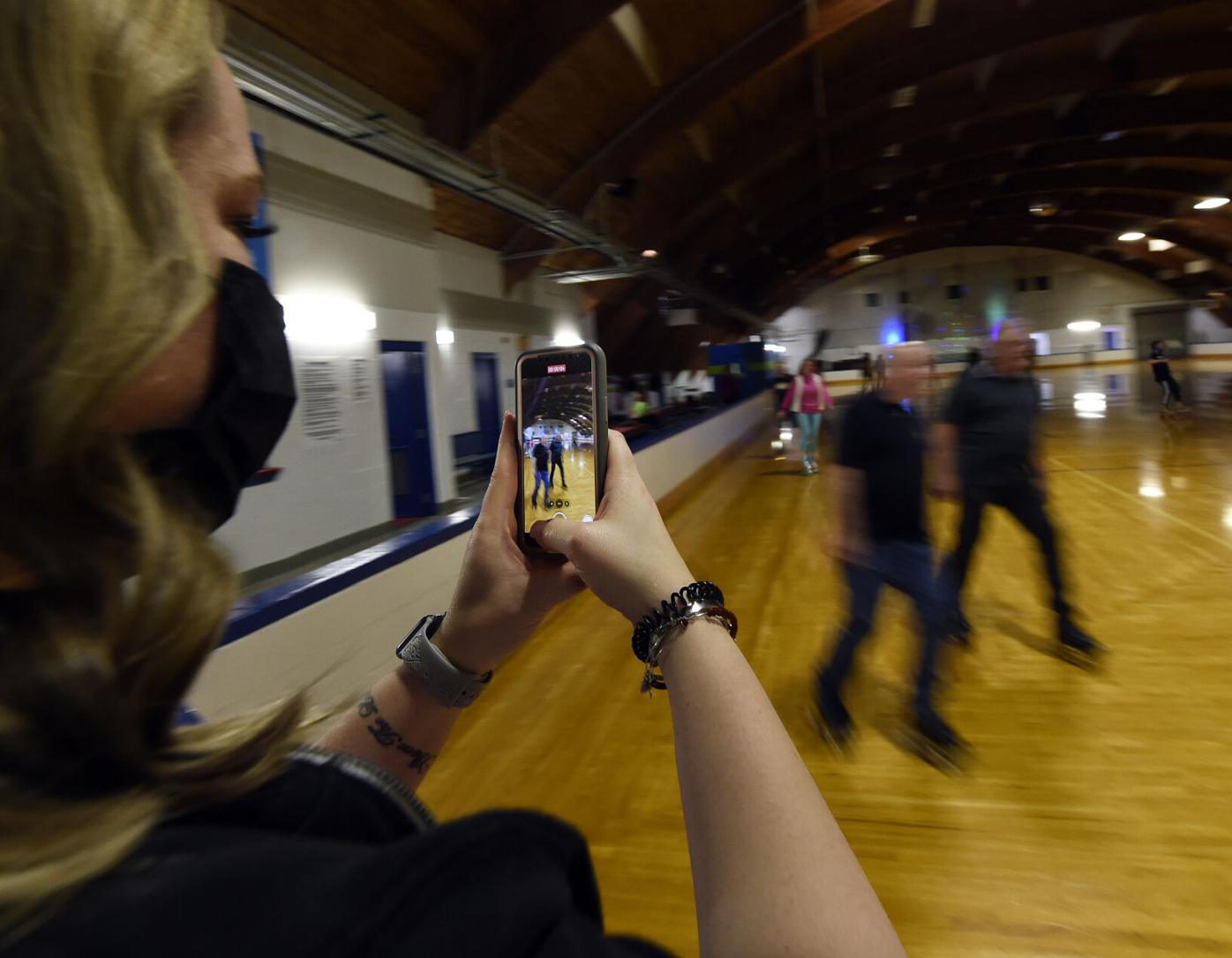 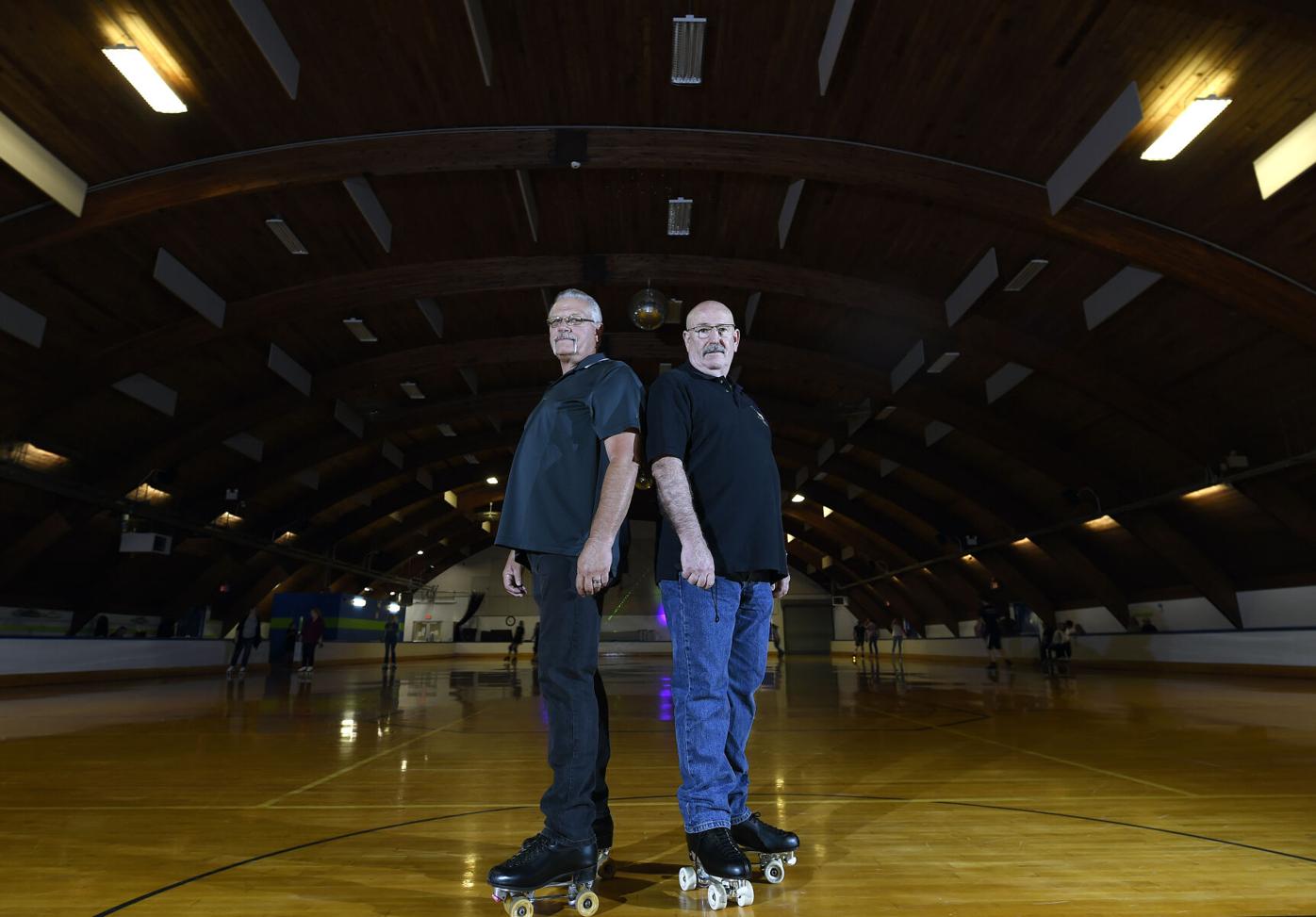 Dean Wenrich, right, and his best friend of over 40 years Ken Mumau, left, at Overlook Roller Rink in Manheim Twp. Saturday May 1, 2021. 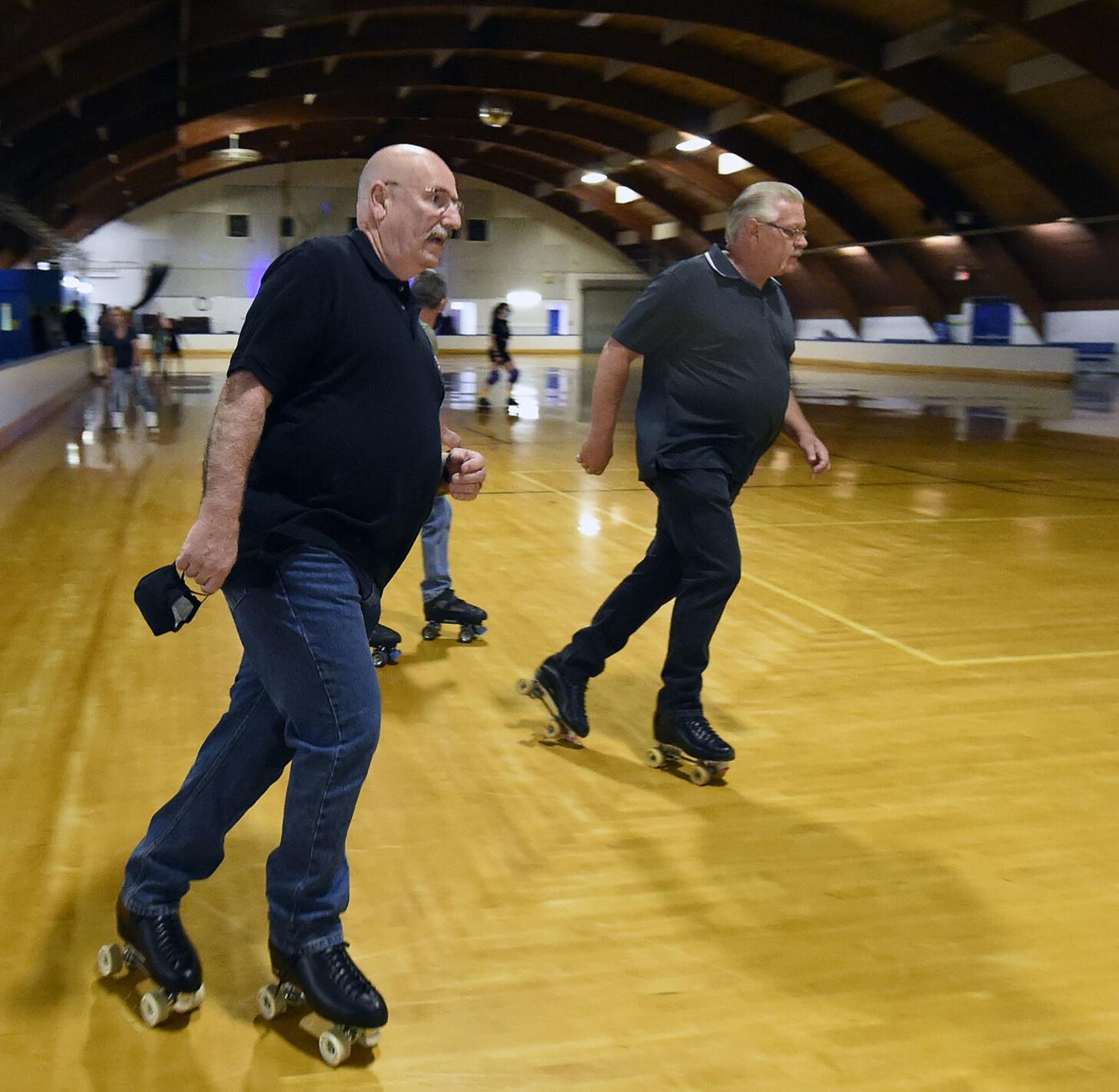 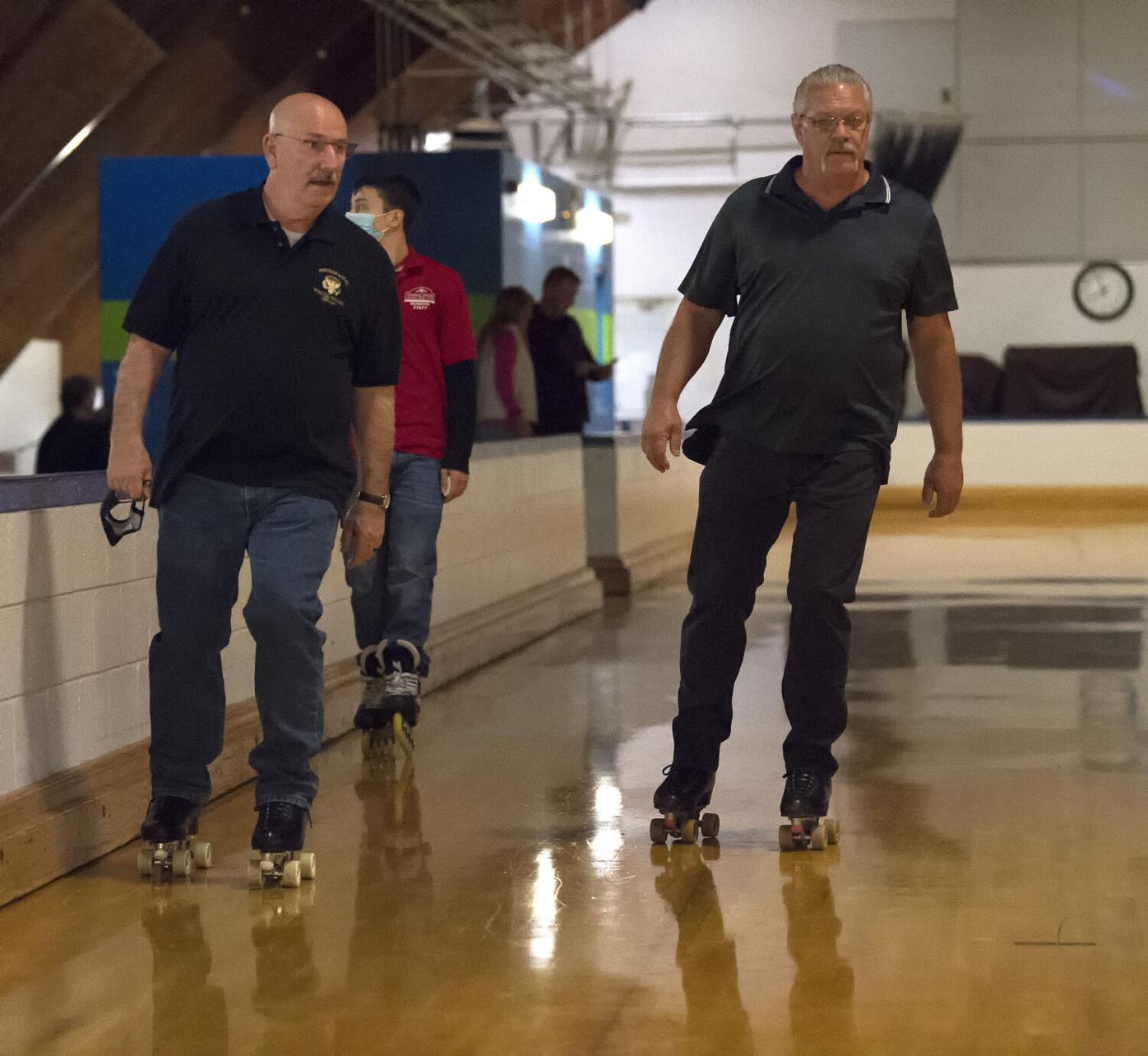 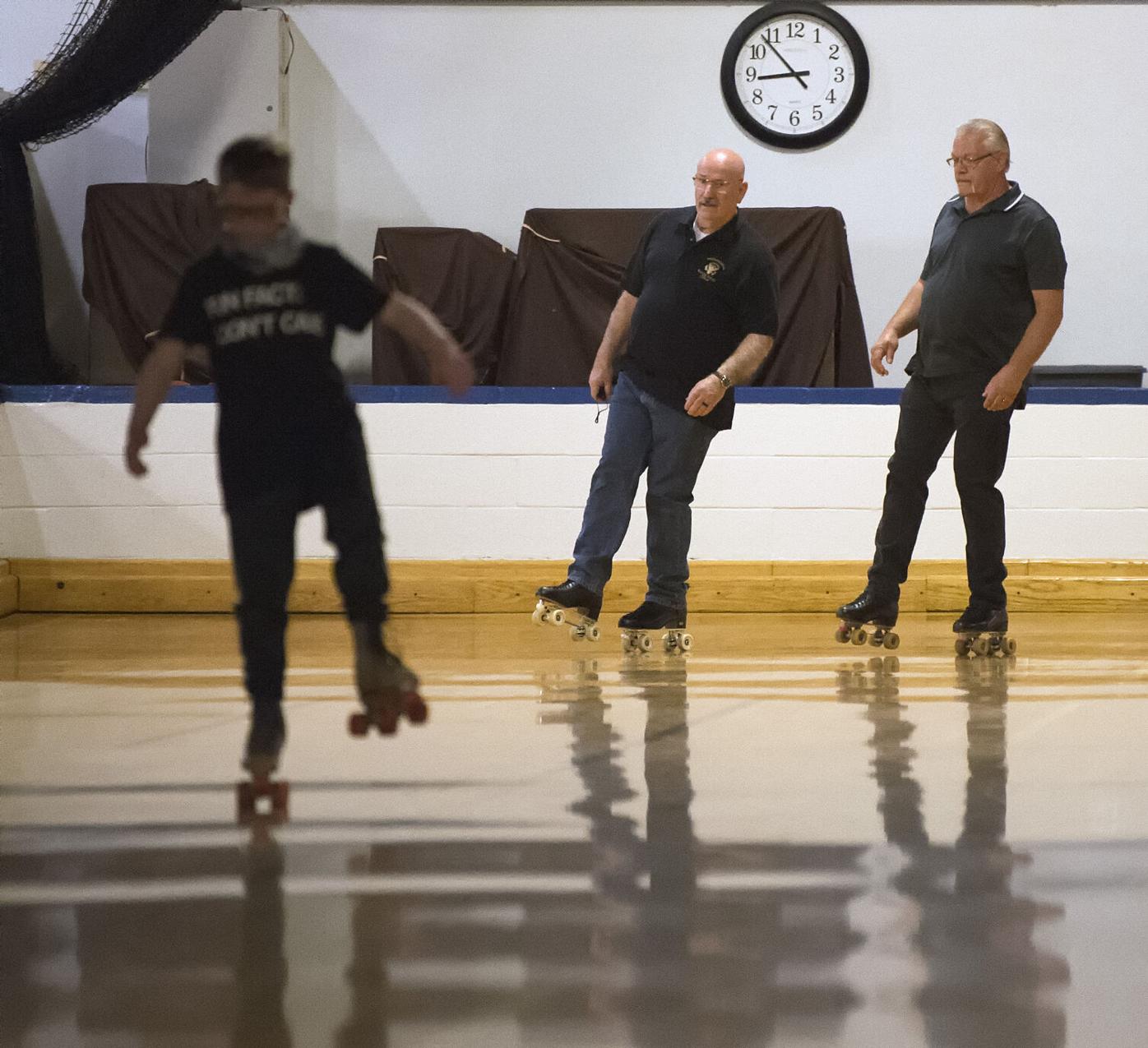 Dean Wenrich, right, and his best friend of over 40 years Ken Mumau, left, at Overlook Roller Rink in Manheim Twp. Saturday May 1, 2021.

When the DJ at the Overlook Roller Rink presses play on the Bee Gees’ “Stayin’ Alive,” everyone on four wheels reports to the floor.

On a Saturday night at Overlook, there’s a mix of young couples on dates, families with small children and members of the Dutchland Derby Rollers practicing their craft.

Amid the people and the unshakable groove from the brothers Gibb, there’s 60-year-old Dean Wenrich. In his glasses and buttoned-down shirt tucked into jeans, Wenrich projects pure confidence as he shuffle skates around, and around, and around again.

Though he perhaps looks more like a favorite uncle than a dedicated weekly roller skater, Wenrich is a man of multitudes.

As mesmerizing as it is to watch Wenrich skate, with his subtle arm and leg movements to the beat, you would never guess that videos of him skating at Overlook have notched more than a combined 10 million views and counting on his daughter Heather’s TikTok account.

And to be fair, neither would Wenrich.

“She tells me it’s got two million views. And I’m like, ‘What does that mean?’” Wenrich says. “And she says, ‘Well, it means over two million people have viewed this.’ And I’m like, what? And then it went nuts.”

Back to the shuffle

Just prior to the emergence of COVID-19, friends from Wenrich’s high school roller skating days, Ken Mumau and Lori Heiney-Mumau, reached out about the possibility of a double date with Wenrich and his wife, Roxanne, at Overlook for old time’s sake.

After mulling it over, the Wenrichs, of Lititz, agreed and promptly bought new skates.

“My wife was saying, ‘You think you want to go and do that at our age?’” says Wenrich. “I’m like, ‘Oh yeah!’ We went out, fumbled around a little bit, but once the muscle memory was there — and it wasn’t as strong, but it was there — it came back pretty quick. We can’t do all the fancy stuff we used to be able to do, but I can still shuffle skate."

It was only in the last few months, after a year of going back and forth on the safety of skating during COVID-19, that the Wenrichs returned. Overlook is open for regular hours, but enforces a strict mask policy for skaters on the rink, though they are allowed to take them down if they’re feeling overheated while skating.

♬ Another One Bites The Dust - Remastered 2011 - Queen

It was during this period that their daughter, Heather Wenrich, 32, started a TikTok account. Her first post on March 31 was a review of a tanning solution that was advertised to her on the platform that she subsequently purchased.

A few days later, she posted her third video, which showcased her dad and two other shuffle skaters busting out moves to the tune of Queen’s “Another One Bites the Dust,” complete with the caption “When your dad has swagger.”

The following weekend, the Wenrichs returned for more skating. Heather posted several videos that night, but one in particular exploded in popularity.

In it, Wenrich is flanked by Mumau and several skating strangers, all coming around the corner dancing perfectly in sync to “Get Down Tonight” by KC & the Sunshine Band. The video was from one of Overlook’s monthly events dedicated entirely to shuffle skating, down to the requisite organ music that is played for the three hour-duration of the evening.

Heather posted the video when she returned home, and by mid-afternoon the next day, the video had passed 1 million views and counting. It’s now resting comfortably at 9.2 million.

One could point to the easy “memeability” of the video for its popularity — the comments range from quips like “Me and the boys after the pandemic is over” to “And this is how your grandpa joined a roller gang.”

Wenrich has a simple answer.

“In my opinion — and I think it’s a definitive answer — there’s so much negative media out there right now, that people want the good stories,” he says.

“They want something that they find wholesome. It’s fun. And the comments are hysterical,” he adds. “People are aching for that right now. The one comment that sticks with me, there was a guy that said he’s 57 years old and this inspired him to go out and get skates. And I’m like, right on man! That makes me feel good, you know?”

Following the immense positive reaction to the video, Heather has now all but transformed her TikTok account into a tribute to her dad, including bestowing upon him the title of “#ShuffleDad.”

“I had to change my bio to ‘I’m sharing videos of my dad,’” Heather says. “The comments are the best, because some of them were like, ‘He’s our dad now.’ So I thought, ‘OK, people want to see more of my dad,’ and my dad said, “That’s right, whatever my people want.’”

It’s an odd victory lap of sorts for a man whose life is tied to the Overlook in many ways, dating back 45 years. It was in the mid to late ’70s when Wenrich, a teenager at the time, worked at the rink with a group of similarly-aged friends. With that came the often “stumbling, fumbling” of getting his footing on wheels.

“Instead of the wall that goes around now, there was a metal rail around the rink,” Wenrich explains. “I was out there, pretty small, and one of the better skaters came around and just kind of threw me off the floor between the rails to get me out of the way. It was interesting. You had to get better, or you just got kind of run over. It was sort of like, challenge accepted!”

Wenrich describes working at the rink until 10 p.m., only to drive to nearby rinks with those same work buddies and skate some more, sometimes until 3 or 4 in the morning. Some nights, over 200 people would pack the rink (that’s 1,600 wheels, if you’re keeping score at home).

“Look, we were there seven days a week,” Wenrich says. “There was two sessions on a Saturday, one on Sunday, private parties on Monday, Wednesday and Thursday. Family night was Tuesday, and a session on Friday. It was seven days a week and we loved it.”

No one type of skating could contain Wenrich. He dabbled in speed skating, roller hockey, competition dance skating and the one that perhaps left the most impression, shuffle skating, which adds subtle dance movements to the act of skating.

As it did so often under the hot, polychromatic lights, love also bloomed for Wenrich, who met his future wife, Roxanne, at Overlook when the two were only 14 years old. The two married when they were 19 years old, and they will soon celebrate 41 years together. Around 1980, when the Wenrichs had their first child, Dean left the Overlook and skating behind.

“You know, the friends all grew up,” Wenrich explains. “We got girlfriends and wives and families and real jobs. Working at a roller rink didn’t pay a lot, I think it was $3 an hour or something like that. But it’s funny, it was always there in the back of my mind, like it was in the closet there saying ‘Hey, don't forget about me, I’m still here, you know you wanna!’”

When Wenrich is not on wheels, he’s working with the City of Lancaster’s Lead Hazard Control Program. In the aftermath of his virality, Wenrich says he jokingly bragged to Mayor Danene Sorace about the video’s success. He asked Mayor Sorace to guess how many views the video had, which was “over 1,000,” to which Wenrich grinned and replied, “Actually, almost more people have seen it than live in the whole state of Pennsylvania.”

“We had our social media guy giving a Zoom meeting on lead poisoning in children, you know, something really important,” Wenrich says. “He couldn't get one person to tune in. Not one was interested in the poisoning of kids. But I could get nine million people to watch me skate around the roller rink! I’m like, are you kidding me?”

Heather Wenrich, who is comfortable on rollerblades but says she resembles a “newborn baby deer” on roller skates, is happy to spend her Saturday nights documenting her #ShuffleDad. The videos haven’t slowed down in popularity, either. Following the death of rapper DMX, Heather posted a video of her dad skating with “Ruff Ryder’s Anthem” as the soundtrack, which itself has almost 2 million views.

One of the enduring hashtags of these videos is “#oddlysatisfying,” which is usually used as internet shorthand for short videos displaying some sort of symmetry or repetition. The #ShuffleDad videos don’t promote specific worldviews, or encourage political action — they’re just videos of a guy who loves skating doing exactly that, usually with a content smile on his face.

Though there are fewer people on the rink than in its prime, Wenrich continues to love the act of roller skating, whether there’s a phone camera on him or not.

“Overlook, for an old girl, she looks pretty good,” Wenrich says. “Roller skating is a passion. It’s been a sort of dormant, smoldering passion, but it’s always been there. I’ve been trying to get the rest of the guys to come back out. We’re taking it one step at a time. It doesn’t matter if you’re big, small, male, female, whatever, it doesn’t matter. You just go out and skate.”

Whether it’s a Tuesday, Friday or Saturday morning, you can confidently bet that someone wil…

After tragedy, Lancaster band seasonal braces for 'Summers to Come'

There’s a song on the new album from Lancaster-based band seasonal that begins with these lyrics:

Filmmaking is thriving in Lancaster County; here's why the area is ripe for creatives

Evan Scudner needed to make it rain on a cloudless summer day.

This weekend marks the spring edition of Lancaster ArtWalk, a self-guided tour of galleries in Lancaster city. Some galleries will offer live …

6 May First Friday events to check out, from Mother's Day art and collages to senior class exhibitions

Lancaster city's ArtWalk returns for the first time since 2019, but rain is in the forecast throughout Friday and Sunday.

Here's your guide to 2021 summer concerts in central PA

The excitement, the volume, the rush of live music — it feels closer now than it has since the first months of 2020.

After missing out on a proper showcase last year, the 2020 entries to the Red Rose Film Festival will finally get their due beginning in June.