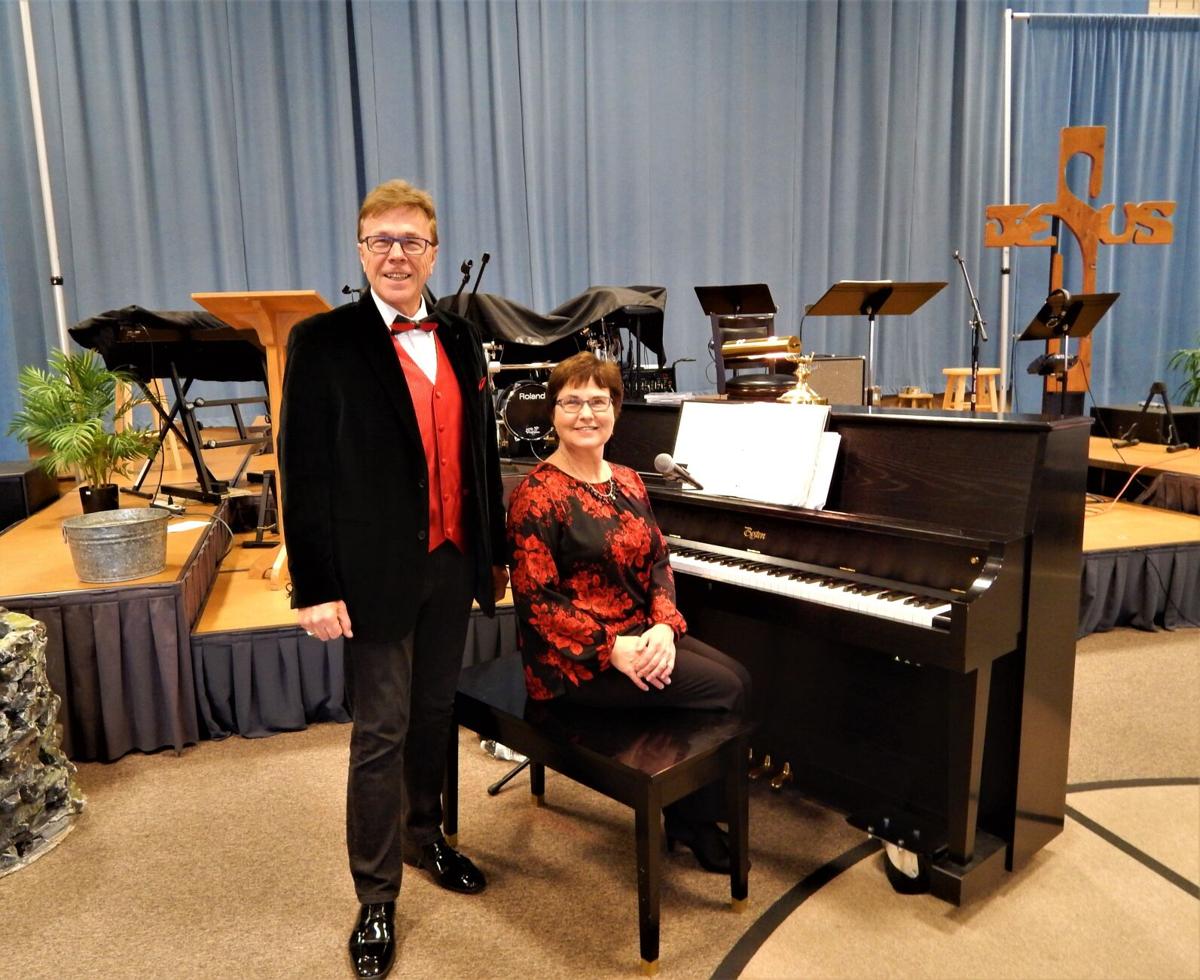 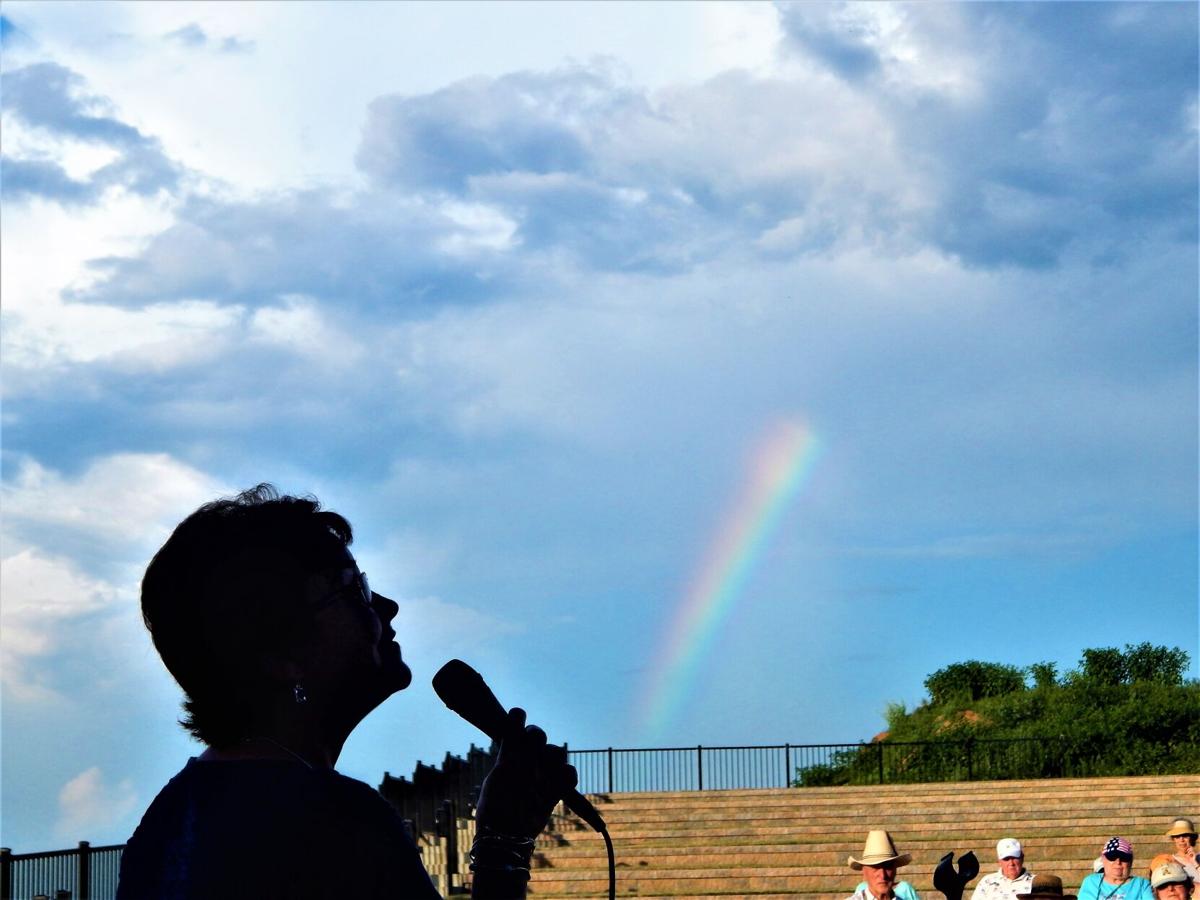 “We were giving an outside concert at Tel Hai Retirement Home,” Dourte says. “Alice was singing “Climb Every Mountain” from “The Sound of Music” and while she was singing the words "follow every rainbow 'til you find your dreams," a rainbow appeared in the sky!  That was a God moment.”

The brother-sister duo of Lamar Dourte and Alice Dourte Lauver always get a good reaction from the audience when they perform their version of “Anything You Can Do (I Can Do Better) from the Broadway musical “Annie Get Your Gun.”

The duet about outdoing one another finds the two showing off their singing chops and engaging in some playful sibling rivalry. As they sing about one upping one another, they challenge each other to hit higher notes and do some pretend bickering, but Alice and Lamar insist it’s all in fun.

“We try to really ham it up and at the end act like we’re really perturbed with each other, but I don’t know that I ever felt a rivalry with him,” Dourte Lauver, of Conestoga, says. “I think we both realize we’re better at some things than others. I’m probably the stronger pianist, but he can probably hold notes longer than I can.”

“We don’t really rival each other. We’re close friends,” Dourte, of Manheim, says.

The two of them will perform a  free concert at 10 a.m. Thursday at Manheim Brethren in Christ Church in Manheim. The concert will be held in the church parking lot, and people are encouraged to follow social-distancing guidelines. The duo will set up a sound system, and the audience can remain in their cars. The concert will be mostly the same except for small details. For example, the duo usually includes a sing-a-long portion of the show, but they are changing it slightly to be safer.

“I’m going to ask (the audience) to hum along on some of the songs instead of sing along which is a safer way,” Dourte says.

Their set encompasses all of those genres. Audience members can expect Broadway songs such as “Do-Re-Mi” and “Edelweiss” from “The Sound of Music” as well as Lamar’s daughter Allison’s favorite song “On the Street Where You Live” from “My Fair Lady.” Other set staples include the duet “The Prayer,” “Amazing Grace” and “He’s Got the Whole World in His Hands.”

“We try to do a variety,” Dourte Lauver says. “Things that people will enjoy hearing and things that are familiar to people.”

Their father, Allon Dourte, served as the pastor of the Brethren in Christ Church from 1950 to 1968.

“I feel like we still have roots in Manheim,” Dourte Lauver says. “Hopefully there’ll be some people (in the audience) that know us or knew us as kids.”

The siblings grew up singing in the church. Lamar is active in Manor Church of the Brethren, and Alice sings at Pequea Church.

“We grew up very active in the church and singing together as a family in church,” Dourte Lauver says. “Singing with Lamar has kept me connected with my faith, my family and my roots. It’s been a really positive thing and has helped to keep us close. It’s maybe a connection that we wouldn’t have had otherwise.”

The pair have been singing together their whole lives and have performed as a duo for 40 years singing about 100 concerts together. They’ve also released two CDs of sacred music and Broadway standards as a duo. Alice, the youngest of four siblings, plans piano for the performances, which include Broadway tunes, patriotic songs and sacred music.

For the most part, the two of them have lived in Lancaster their whole lives, though Alice, an English teacher with Lancaster Mennonite School, spent some time teaching English in Japan.

“There are lots of musical opportunities in Lancaster,” says Dourte, a retired family therapist.

Lamar, who sings tenor, and Alice, who sings soprano, have performed with the Wheatland Chorale, Lancaster Opera Company (now known as OperaLancaster) and Lancaster Chamber Singers, among other groups.

Lamar, the second youngest, says that while the whole family was musical, he and Alice always had a special chemistry.

“There was something special about our voices,” Dourte says. “We had very classical, clear, soprano and tenor voices and were interested in sacred, classical and Broadway music.”

“Maybe because we’re brother and sister we have similar instincts,” Dourte Lauver says. “Like maybe we should breathe here or slow down here.”

The two have sang and performed together so much that it’s become almost second nature.

“I’ve gotten used to playing and singing,” Dourte Lauver says. “And we’ve done these songs so many times we really should be able to do them in our sleep.”

The ‘Old-Fashioned Revival Hour’ concert to return to Calvary Church

The house may change, but home is forever [I Know a Story column]

Growing up, home was always our house at 1045 Lambley Road in Landisville.

Senior life: Amid pandemic, remember to ‘stay in touch’ [column]

From the moment you and I are conceived, we are bombarded by the experience of touch. Over the next seven to nine months we languish in our mo…

United Way of Lancaster County invites you to partner with us for the 29th annual Day of Caring.

Ezra Kauffman has taken to folding origami pieces during his church Zoom services.