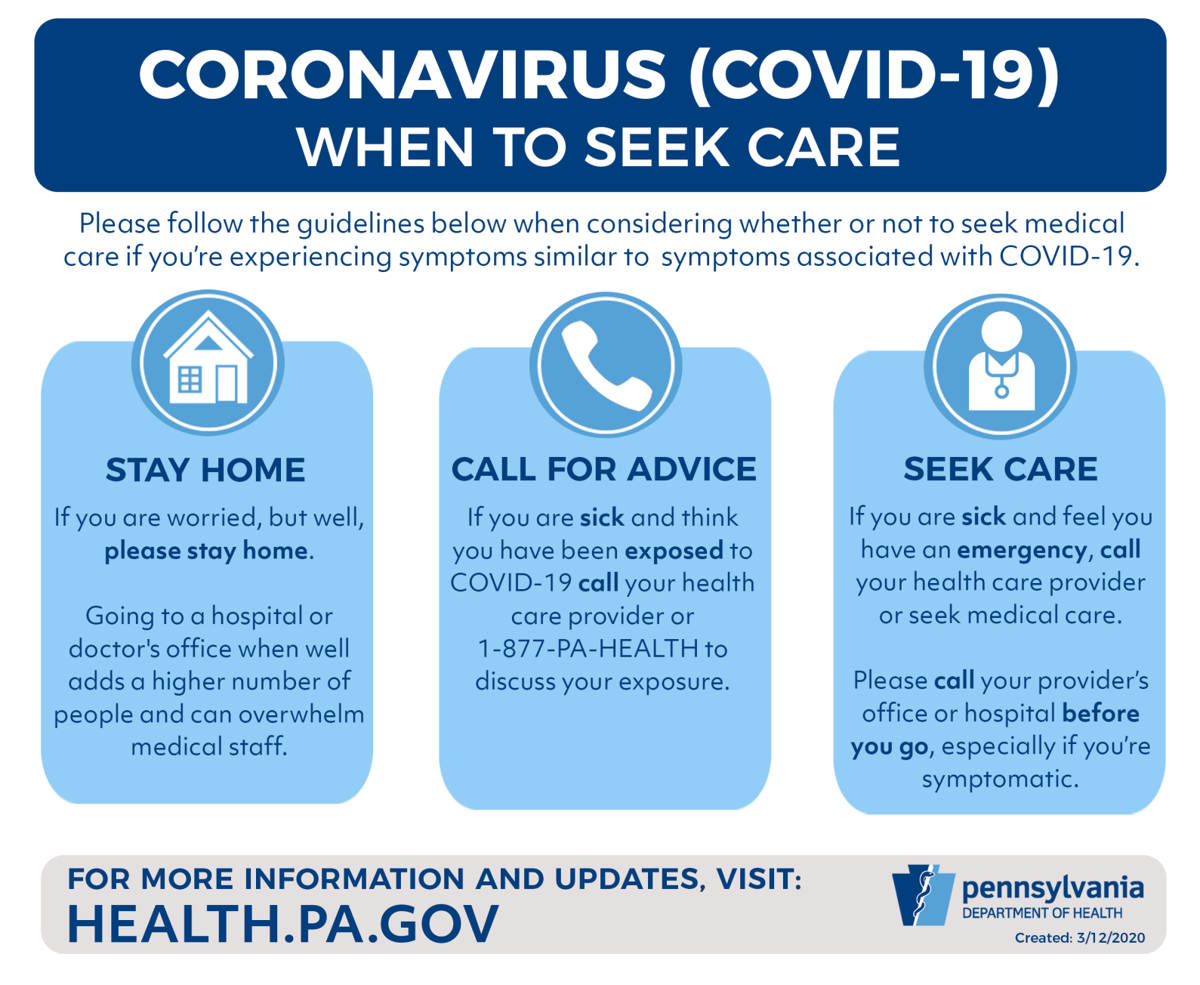 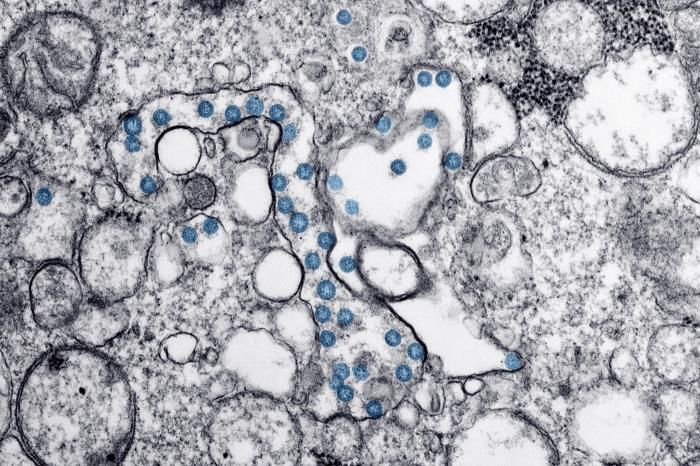 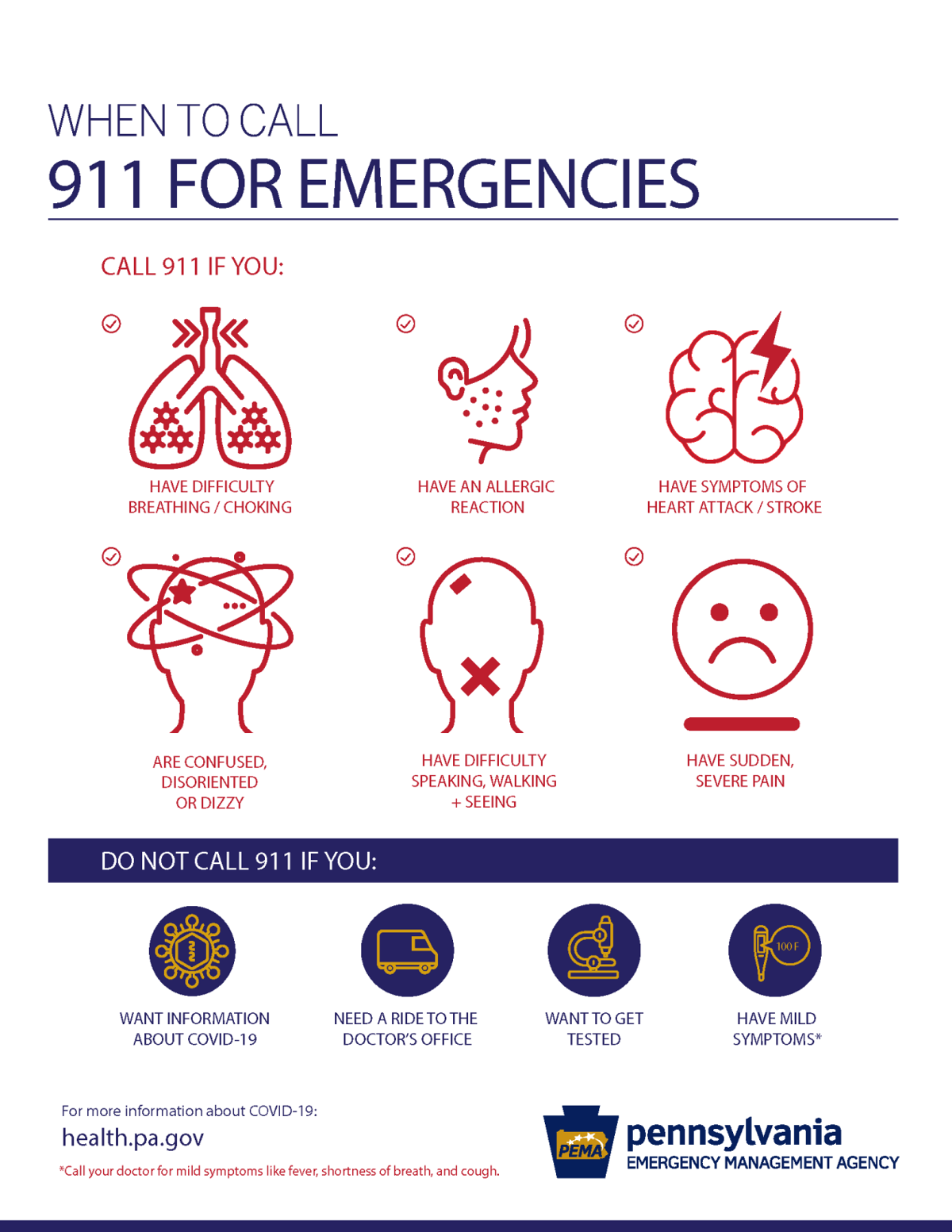 Anyone who is concerned they might have coronavirus should call first, not just show up at an doctor's office, urgent care center or emergency department, health experts say.

The precaution is to avoid potentially infecting staff and patients and to keep from interrupting lifesaving care staff are already busy giving for other conditions.

"If someone has traveled to an area where an outbreak is occurring and believes they may have COVID-19, we are asking them to call 1-877-PA-HEALTH (1-877-724-3258) to allow us to coordinate their arrival at a medical facility, whether a hospital, doctor’s office, need for EMS, etc.," Pennsylvania Department of Health spokesman Nate Wardle said.

In a teleconference Wednesday, hospital leaders in the state said questions from the community have risen notably in recent days.

Penn Medicine hospitals have had more than 20 patients come in that through triage were deemed high enough risk to initially put in masks and isolation rooms, Brennan said. He noted that none were tested, as further questioning showed reason not to, such as symptoms starting after the virus incubation period would have ended for returning travelers.

No cases of the virus have been confirmed in Pennsylvania to date.

3 things to know about flu in Pa.; it's on downswing but still a concern amid COVID-19 prep

As the COVID-19  situation develops, experts encourage people to stay informed by getting in…

Is the threat of coronavirus impacting transportation hubs in, around Lancaster County? Not yet, officials say

While fears of a worldwide pandemic from COVID-19 — also known as coronavirus — run rampant, area transportation hubs are running business as usual.

All the major health systems in Lancaster County offer some form of virtual visits, and some of the insurers do too.

During A Pandemic, States’ Patchwork Of Crisis Plans Could Mean Uneven Care

“People don’t understand how close the health system runs to capacity every day. We just don’t have the trained staff to staff much beyond what we have now,” Hick said.

Update: There are now six presumptive positive cases of coronavirus in Pennsylvania.

7th Pa. COVID-19 case is in 'critical condition'; CHOP cardiologist among those diagnosed

How To Avoid Coronavirus? Lessons From People Whose Lives Depend On It

How To Avoid Coronavirus? Lessons From People Whose Lives Depend On It

The Coronavirus, The Congressman And Me

I got the COVID-19 text at 8:30 Tuesday night, three days after returning from a journalism conference in New Orleans.

Lancaster County and many other parts of the country could be severely short on hospital beds if lots of people get COVID-19, a new analysis shows.

Flu cases have fallen so much that the Pennsylvania Department of Health is ending its regular reports for the season, it said this week.

All Pa. school districts closing for 2 weeks over coronavirus fears