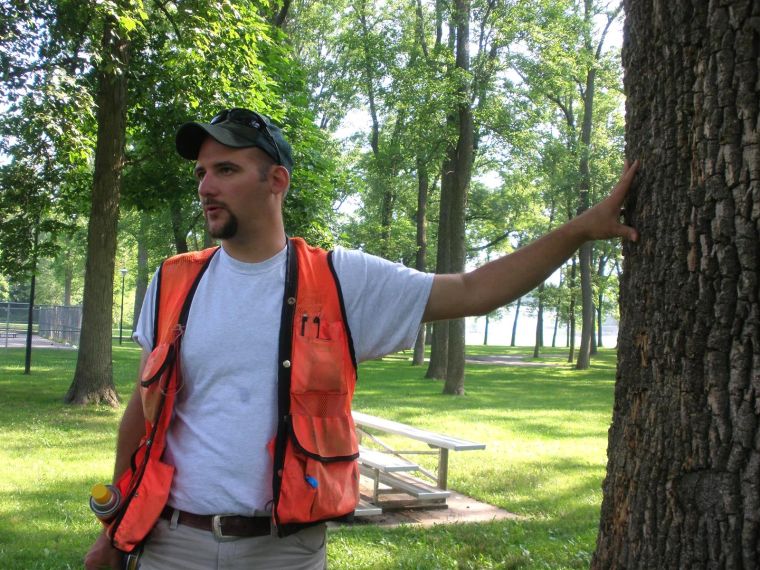 Forester Rick Hartlieb explains that the emerald ash bore feeds just below the bark during a recent visit to Denver Park. Officials are considering ways to keep the insect from imperiling the trees. 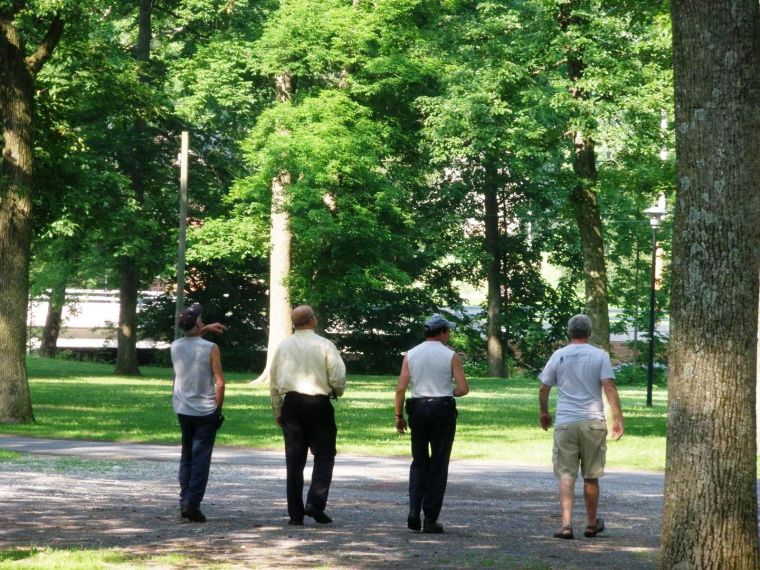 Denver officials walk among stately, 60-year-old ash trees that will soon be threatened by the emerald ash borer. 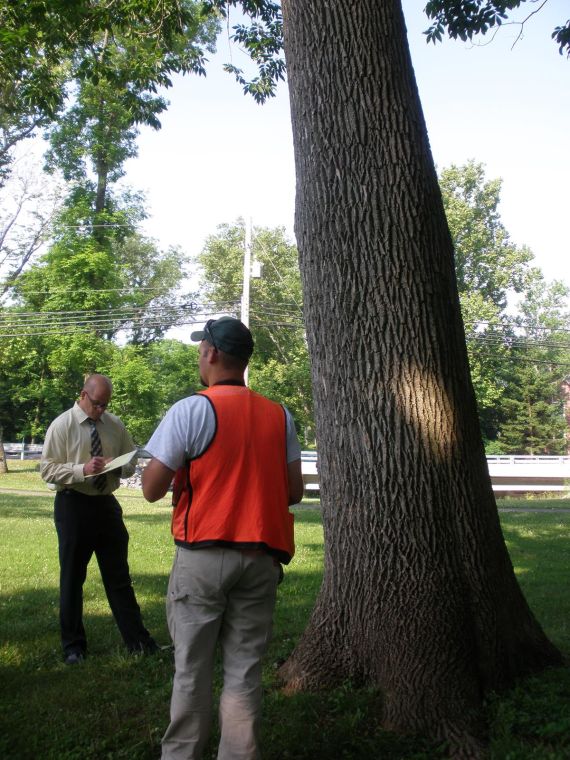 Forester Rick Hartlieb explains that the emerald ash bore feeds just below the bark during a recent visit to Denver Park. Officials are considering ways to keep the insect from imperiling the trees.

Denver officials walk among stately, 60-year-old ash trees that will soon be threatened by the emerald ash borer.

Denver Park may lose about 100 trees, or about half of the grove that provides shade in the 16-acre park on the west side of town.

Denver is considering the move as the emerald ash borer, a killing machine bug, marches south from Berks County toward northern Lancaster County.

Although the ravenous pest is not officially in Lancaster County yet, "It's only a matter of time," Rick Hartlieb, forester with the state Department of Conservation and Natural Resources, recently told Denver officials.

Hartlieb and borough officials will review options for the park's ash trees at a borough council meeting at 7 p.m. Monday at 501 Main St., Denver.

Decisions need to be made soon, as the emerald ash borer has been identified as close as Bernville in Berks County, about 17 miles north of Denver. Forestry officials say it's only a matter of time before it arrives in Lancaster County.

Denver officials walked with Hartlieb for almost two hours in a recent tour of the park to look at each ash tree there.

Ash trees that still are healthy and have timber value could help the park in its management plans. Those trees could be worth up to $3,500, based on current market prices, the borough has estimated.

"The revenue received from the timber could offset the cost of removing stumps, planting new trees and treating the healthy, remaining ash trees," said Mike Hession, the borough’s manager.

Treating a tree is expensive — around $300 — and multiple treatments are needed, Hartlieb said. But if you can treat a tree while it is healthy, some may be worth that cost.

Hartlieb suggested that officials consider planting one new tree for every two ash trees that the borough ultimately decides to remove from the park, established on land that Samuel L. Snyder donated after World War II in 1946.

"This could be a real opportunity for the community of Denver to re-shape how they want Denver Park to look," he said.

Shade tree commission member Doug Musselman, at an early June meeting of the combined park board and recreation board, said, "We could easily put other trees that are fast growing, like tulip maple, in the park and they'd blend with the trees already there."

The changes may be difficult for some residents, however.

Two local women who were in the park on the day the forester conducted his walk said they love the surroundings.

"Oh, this park is so beautiful,” said one, who declined to be identified. “We come here all the time to walk. It would be a shame to lose so many trees. I hope that they (the borough) will be able to save some. We just love all the shade."

Council members learned about different tree pests while on the tour.

While walking through the park, Denver council member Mike Cohick pointed out holes in an ash tree.

Borough council welcomes community input as it considers the best way to deal with the invasive, killer insect.

Council has not adopted a plan of action and is hoping to hear more from residents at its meeting Monday.