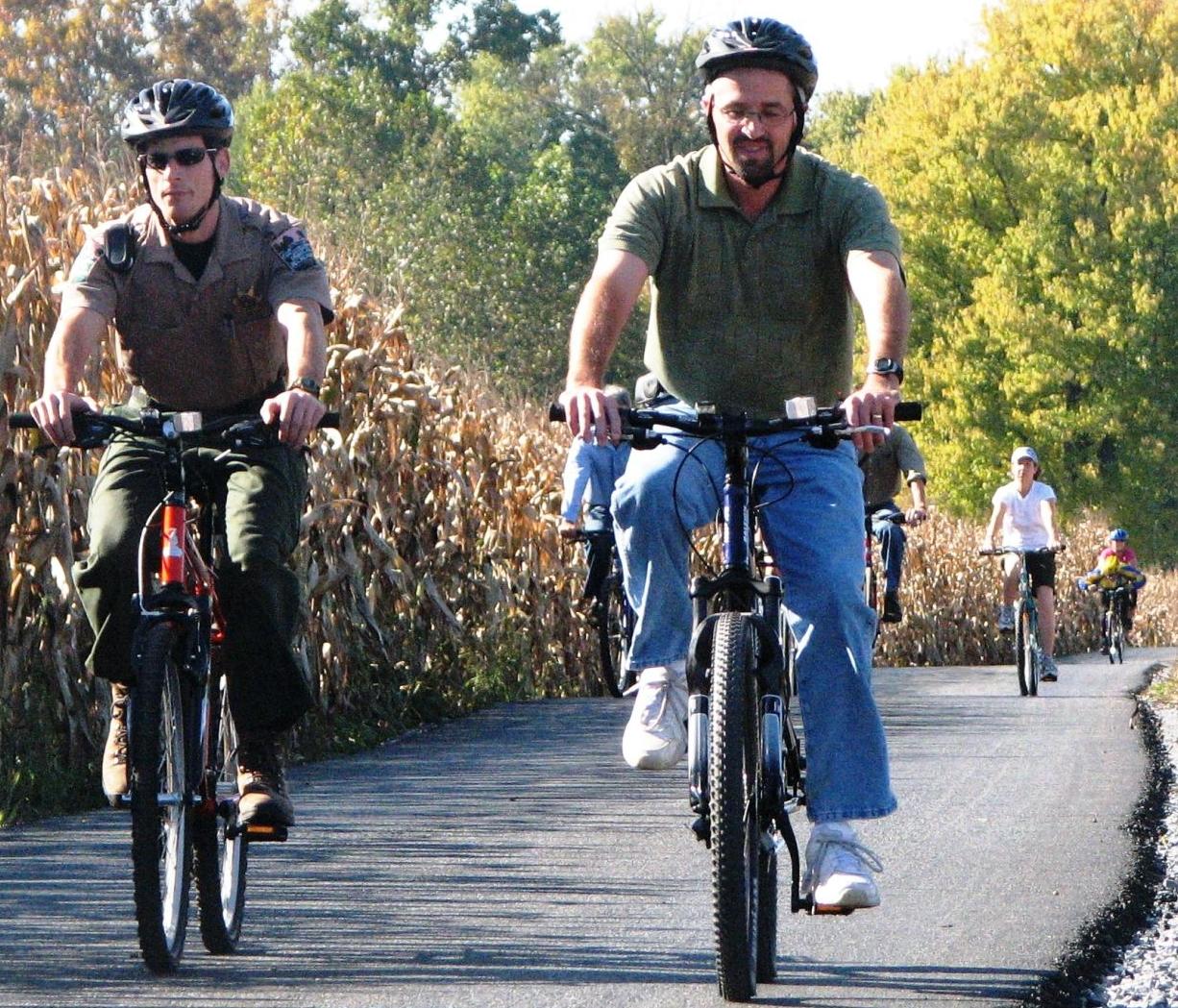 This map shows the 1.5-mile segment (in red) of the Northwest Lancaster County River Trail that will be built in 2015 in Chickies Rock County Park.

This map shows the 1.5-mile segment (in red) of the Northwest Lancaster County River Trail that will be built in 2015 in Chickies Rock County Park.

Hikers, bikers and other trail enthusiasts can look forward to a new, 1.5-mile paved extension to a popular trail between Marietta and Bainbridge along the Susquehanna River.

The nearly $1-million project through Chickies Rock County Park, south of Marietta, will begin this summer, with completion expected by year's end.

The county, however, will contribute $450,000 to the project to cover the cost of asphalt and other materials, said Paul Weiss, county parks and recreation administrator.

The Chickies Rock segment of the Northwest Lancaster County River Trail is a key link in a 14-mile trail along a former canal first envisioned more than 12 years ago.

The 10-foot-wide, asphalt path through the park will join to the south with a trail segment into Columbia and to its newly opened, $2-million meeting and reception facility facing the Susquehanna.

The Columbia portion of the trail is under construction as part of the Route 441 truck bypass to be completed this fall.

The Chickies Rock segment will connect, to the north, to the trail through Marietta.

Weiss said completed portions of the trail, including a 6.5-mile paved segment between Marietta and Bainbridge, are getting heavy use. He expects even heavier traffic once the connection to Columbia is complete.

"I think the Northwest River Trail is and will continue to be one of the recreational gems in Lancaster County," said county commissioner Craig Lehman in approving the agreement with the waste authority.

The Chickies Rock segment will open more than a year earlier than expected because the waste authority offered to cover nearly $500,000 in design and construction costs, Weiss said.

The county parks department had planned, prior to the authority's offer, to seek a $450,000 state grant to match the county's funds for the project.

"If we go the grant route, we're looking at 12 to 18 months to begin this project," Weiss told the commissioners, assuming the state awards a grant.

The waste authority, which owns a waste-to-steam incinerator near Bainbridge, has been a partner in creation of the river trail from the beginning, said David Wilhelm, the authority's senior manager for capital projects.

Most recently, the authority invested $325,000 into a 330-foot-long trail walkway around the Shock's Mill railroad bridge between Bainbridge and East Donegal Township.

"We feel very confident we can complete the (Chickies Rock) project on time, and we would love the opportunity to do that," Wilhelm told the commissioners.