Jerre Groff, formerly of Strasburg, passed from this life on August 4, 2020 at Oak Leaf Manor, Millersville, PA at 92 years of age. He was born in Lancaster, PA on May 29, 1928 to the late R. Charles and Verdna (Welk) Groff.

Jerre worked on several farms in the Strasburg area as a young man, including for his Uncle Lloyd (known as Bud) Welk and then as a baker for Brueninger's Bakery in Strasburg. He enlisted in the Navy at 17 years old. He had completed all of his required high school credits early so he enlisted during the school year to join the war effort. He was given leave after basic training so he could graduate with his classmates at Strasburg High School. He proudly served on the aircraft carrier U.S.S. Randolph in the Mediterranean Sea area, escorting the hospital ship U.S.S. Hope immediately after WWII.

After being discharged from the Navy, he worked for Hildebrand Meats in Strasburg, and then started his own painting business. Jerre had a paint, flooring and kitchen store on West Main Street in Strasburg for many years. During that time he served as a Justice of the Peace from 1960 to 1965. Lastly, he worked as a clerk at the Pennsylvania State Liquor Stores in the Manor Shopping Center and Quarryville.

Not one to be idle, during that time he processed countless deer for hunters at his butcher shop in Hessdale and also catered pig roasts. He and his wife, Jane, produced incredible roasted pigs with all the "fixins". He also painted and installed flooring for friends and relatives whenever the need arose.

Jerre married Jane Rineer in 1948 and were married for 41 years. She passed away in 1990. They had five children, Michael (Sandy) Groff, Strasburg, Douglas (Jackie) Groff, Strasburg, L. Steven (Diane) Groff, Lancaster, Kathleen (Mike) McMullan, Marcus Hook, and Christine (Larry) Day, Bozeman, MT. He is also survived by his, 13 grandchildren and 16 great-grandchildren with 1 great-grandchild on the way, his brother, Robert C. Groff, Quarryville, and numerous cousins, nieces and nephews. Jerre was preceded in death by his wife, Jane, his son, Michael, and his brother, Harry (Hen) Groff.

Through the years he had been active in the Strasburg Jaycees, Strasburg Lions Club, Strasburg V.F.W, Odd Fellows, the Benevolent Order of the Elks and the Slumbering Groundhog Lodge. He loved baseball and played in the Strasburg league for many years and in the Willow Street Old Timers League.

The family would like to thank Masonic Village Hospice for their compassionate care.

At his request, private services will be entrusted to Dewald Funeral and Cremation Services, Quarryville, PA. To sign the online guestbook, please visit:

Plant a tree in memory of Jerre Groff
A living tribute » 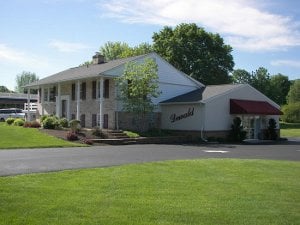