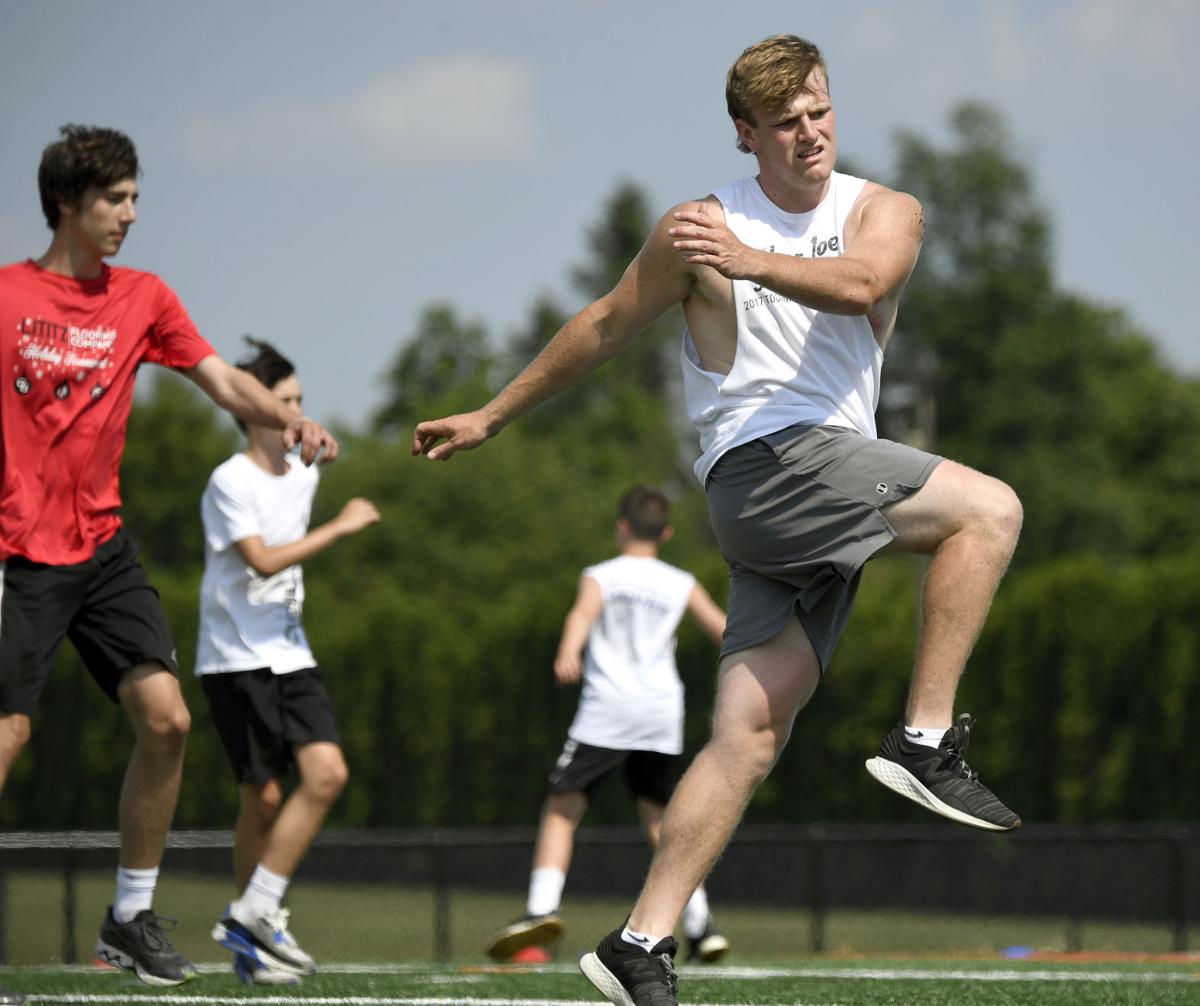 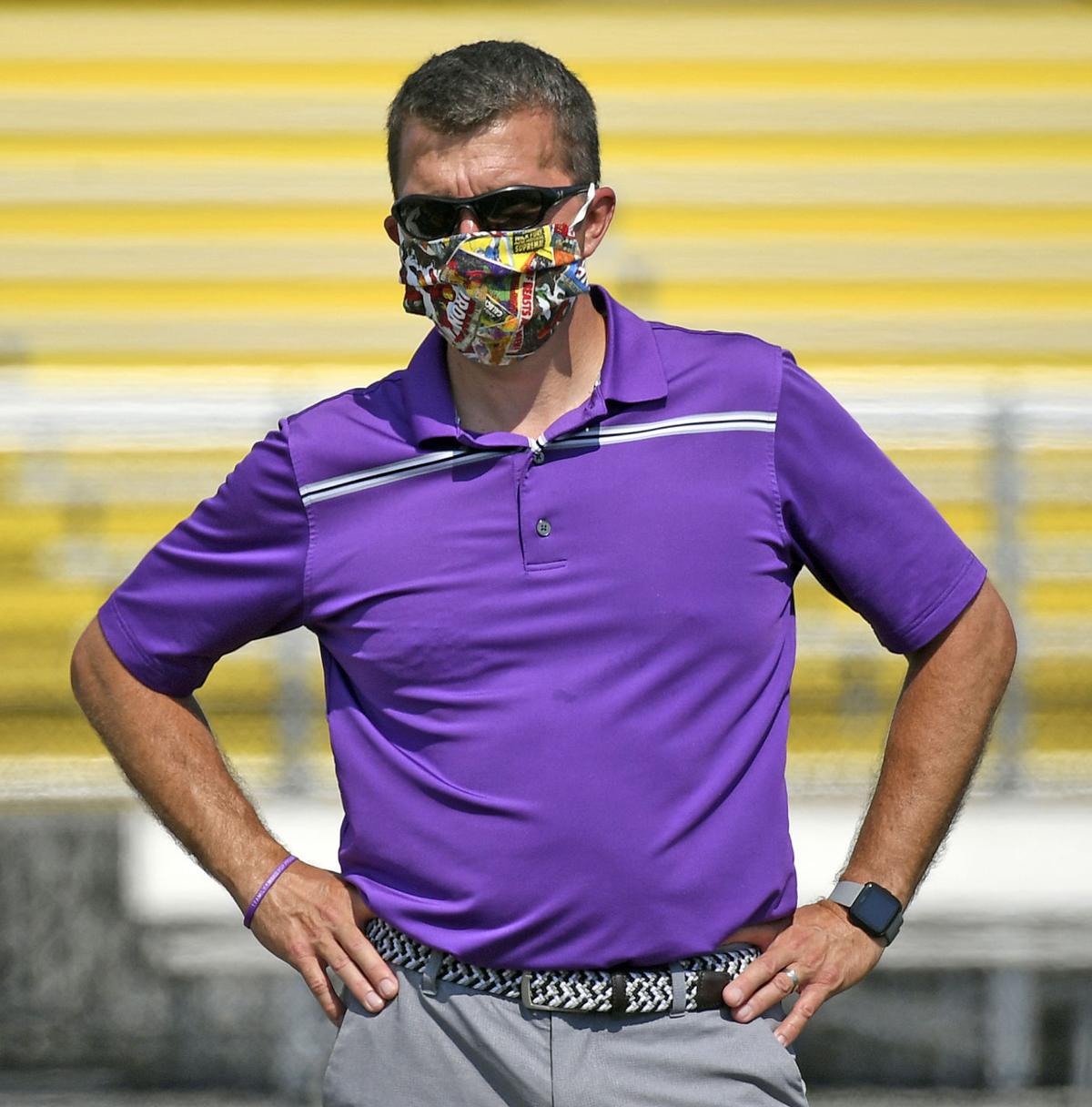 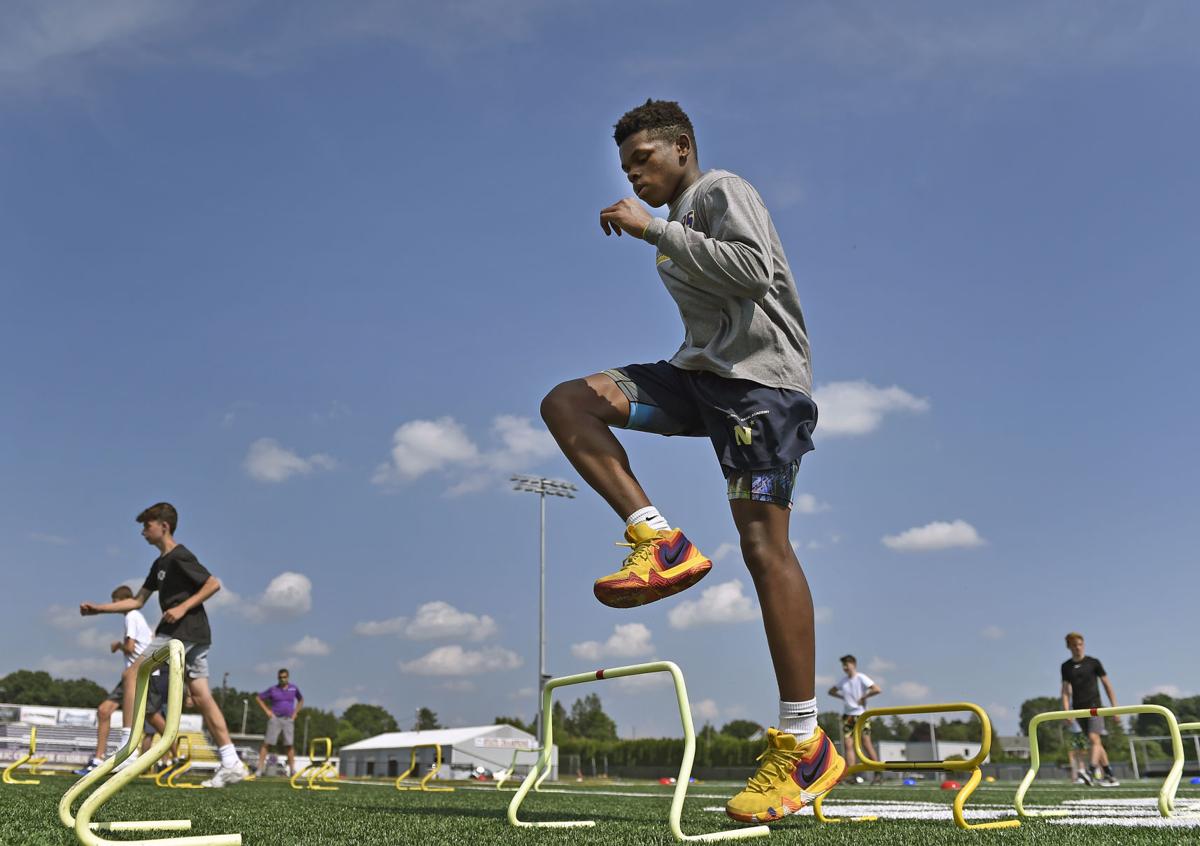 Curtis Cannon works on his agility skills as the Lancaster Catholic boys basketball team works on conditioning outdoors at the school's Maley Field on Monday, June 22, 2020. 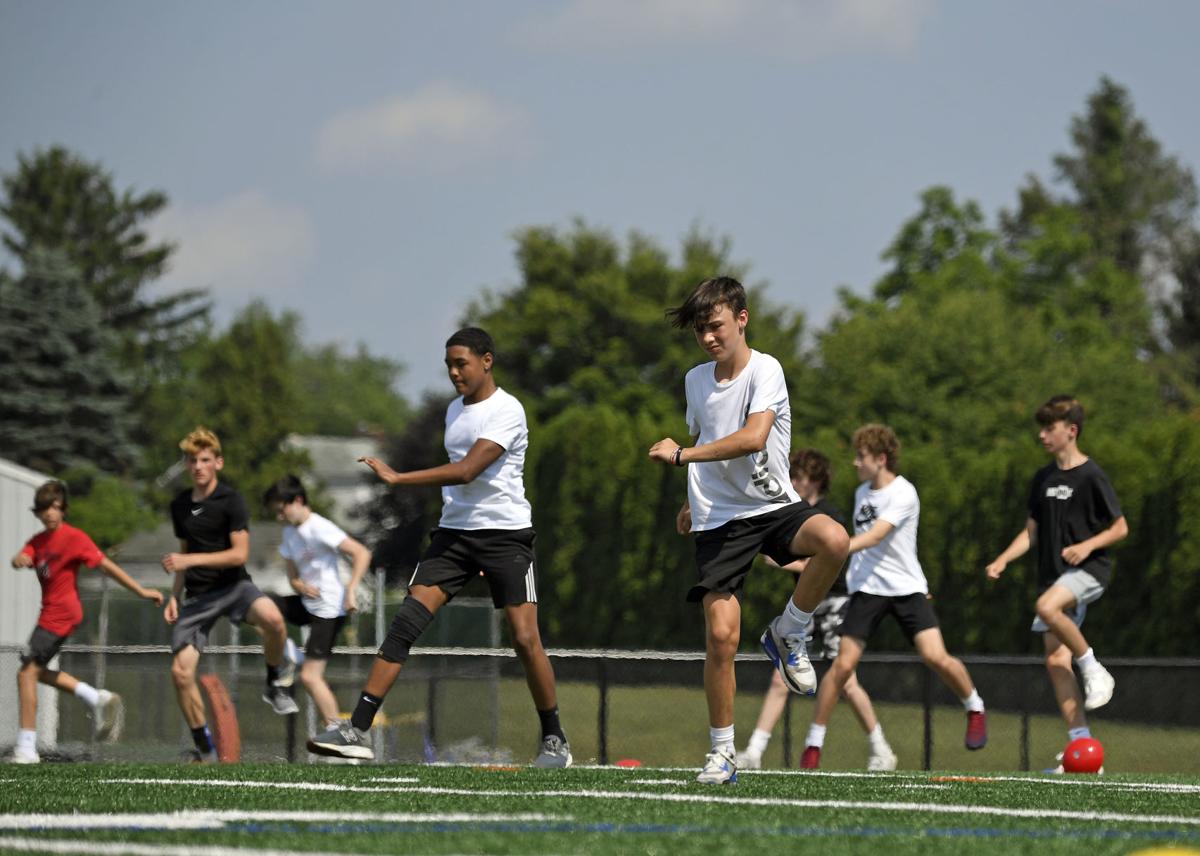 Members of the Lancaster Catholic boys basketball team works on conditioning outdoors at the school's Maley Field on Monday, June 22, 2020. 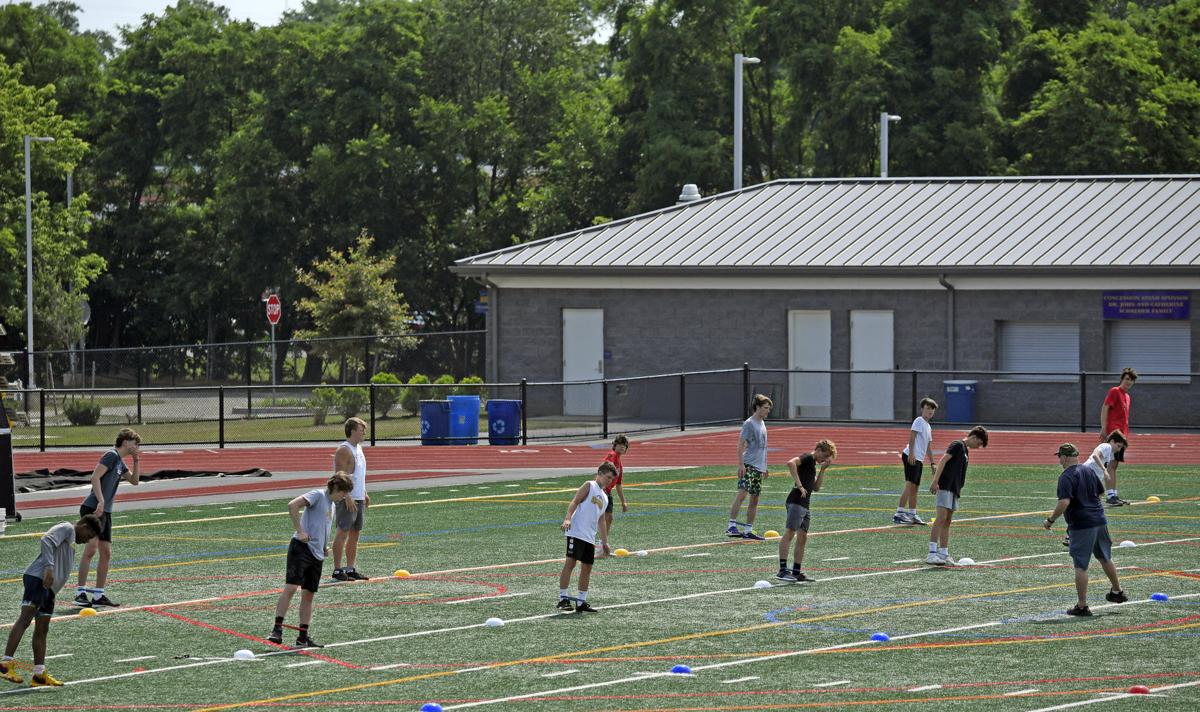 Curtis Cannon works on his agility skills as the Lancaster Catholic boys basketball team works on conditioning outdoors at the school's Maley Field on Monday, June 22, 2020.

Members of the Lancaster Catholic boys basketball team works on conditioning outdoors at the school's Maley Field on Monday, June 22, 2020.

Lancaster Catholic and Manheim Township welcomed student-athletes back onto their campuses for voluntary offseason conditioning workouts Monday. They are believed to be the first schools in Lancaster County to officially do so since the COVID-19 pandemic closed schools in mid-March.

The moves came as a result of both schools having recently approved return-to-play plans, a component required by Pennsylvania Gov. Tom Wolf when he issued a set of guidelines June 12 to allow the state’s schools to begin practices and workouts.

With those plans come stringent safety protocols for coaches and student-athletes to follow in order to prevent the spread of the coronavirus.

Donning facemasks upon arrival at Lancaster Catholic Crusader Stadium, 21 boys basketball players entered the stadium one by one off the Victory Lane entrance. Maintaining a distance of six feet apart, the players formed a line toward the concession stand, where athletic trainer Beth Newill used a temple thermometer to check the temperature of each player — a student-athlete must have a temperature below 100.4 degrees in order to be allowed to participate.

After a temperature reading, each player then removed his mask and walked onto Maley Family Field, instructed to stand next to a cone, which strength and conditioning coach Pete Anderson had placed at every 5-yard line, spaced six feet apart. 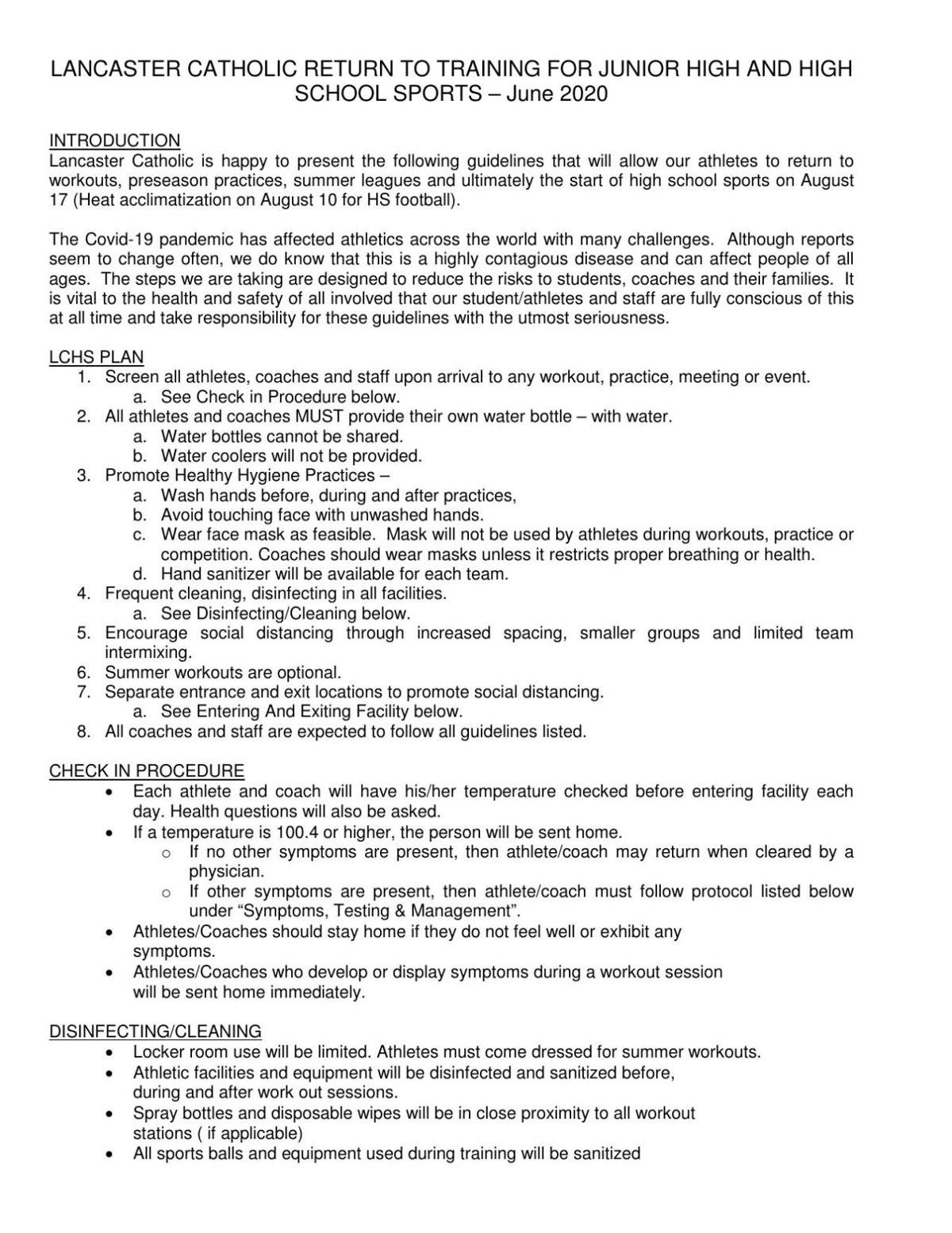 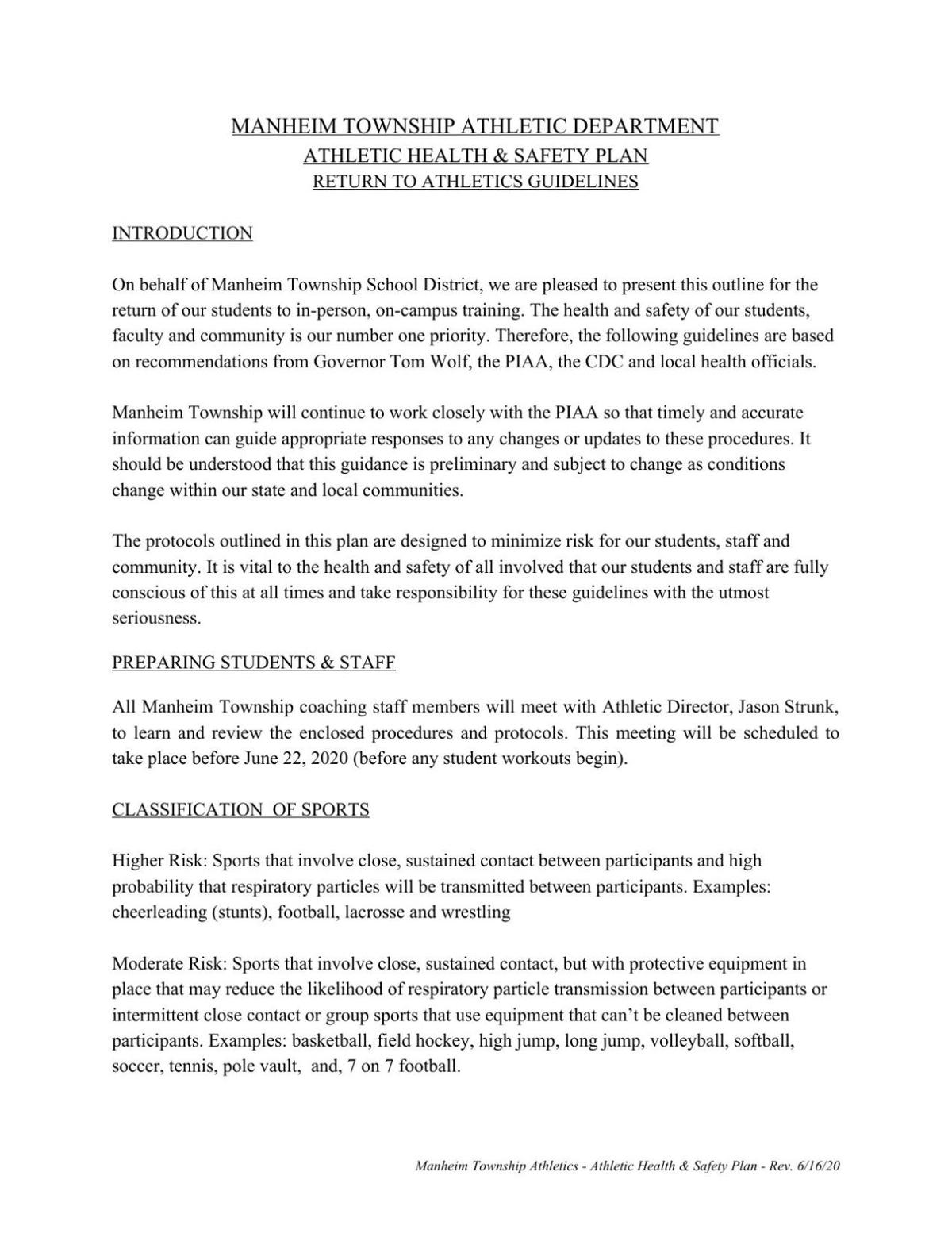 For the next 90 minutes, Anderson and athletic director Rich Hinnenkamp walked the players through stretches with resistance bands and exercises geared toward developing strength in players’ hips and lower body. Each player brought his own bottle to drink out of during water breaks, on a muggy, sunny day when temperatures hovered in the low- to mid-90s.

“This is all geared toward getting the student-athletes’ strength built back up,” Hinnenkamp said.

Hinnenkamp and all other Lancaster Catholic school officials, such as Anderson and Newill, were wearing facemasks, a protocol recommended by the Centers for Disease Control.

“I was really excited to get back. I knew they were going to be safe about it, so I wasn’t really worried,” Lancaster Catholic rising senior boys basketball player Devin Atkinson said. “It definitely is weird because when I think of basketball workouts, it’s getting to the gym and getting some shots up. This is not that. But it’s the right thing to do because a lot of these kids haven’t been working out as much, because they can’t really, I guess.”

After the practice ended, the players exited on the opposite side of the field from which they entered, in order to minimize contact when the next group of student-athletes arrived — girls soccer players and girls basketball players practiced later in the day.

Earlier in the day, over at Manheim Township, more than 60 football players practiced for about two hours. However, with the county currently in the yellow phase of Wolf’s reopening plan comes the limitation of groups of people at 25 or less. To meet that cap, football players were separated into groups of 22.

“We have one group at one of the field,” Manheim Township football coach Mark Evans said. “Another group at the other end of the field, and a third group in the weight room. And we have them transitioning between those three zones.”

Each student-athlete and coach are asked to try to stay six feet apart, and to limit unnecessary contact, such as high-fives or first bumps. Scrimmages and 7-on-7 drills are also prohibited while under the yellow phase.

“In the weight room, we have eight buckets set up to wipe down equipment in between turns,” Manheim Township dean of students and boys basketball coach Matt Johns said.

“Ideally we’re keeping them in similar groups,” Johns said. “We’ll have up to three kids shooting with the same ball. Those three kids will be shooting together each time.”

Light contact and scrimmages will be allowed at schools when the county moves into the green phase, which Wolf announced recently will happen for Lancaster this Friday. Groups of up to 250 people are also permitted under the green phase.

But for now and in the near future, school officials at both Lancaster Catholic and Manheim Township are following safety protocols and purposely taking things slow in welcoming back student-athletes.

“My No. 1 fear is I’m not ready to hit the ground and go from zero to 60 in two seconds,” Evans said. “We absolutely have to take baby steps. Be slow and be smart about this.”

Lancaster County businesses eager to reopen under 'green,' while mindful of restrictions

Here are the differences between the red, yellow, green stages of Gov. Wolf's plan to reopen the state [update]

Turned loose by the Commonwealth, high school athletic departments are back in business

To this point in the year, the COVID-19 pandemic has led to the cancellation of 2020 seasons for several sports, including high school and col…

Manheim Township commissioner proposes advisory board for policing; Gifford appointed to board

To prevent injury after long layoff, coaches building student-athletes' strength from the ground up

Nine years ago around this time, the NFL lockout ended and players reported to camp in July 2011. That had followed a four-month layoff during…

After competing in regional special-teams events in the month of June, multiple Lancaster-Lebanon League kickers and punters have moved up the…

This hasn’t been exactly the silky smooth job transition Chris Maiorino was envisioning.

After a nearly two-month delay because of the COVID-19 pandemic, three Lancaster-based girls lacrosse club programs have begun practices withi…

As of mid-July, the PIAA is full steam ahead with getting fall sports started next month, and trying to get as many games played as possible t…