Gov. Tom Wolf was asked during a Monday news conference about possibly changing his stance on not allowing spectators at high school sporting events this fall. Wolf deferred to Pennsylvania Department Health secretary Dr. Rachel Levine, who said she would have more information on the measure Wednesday.

Wednesday came and went with no information coming from the governor's office.

At the end of his news conference Thursday, the governor was again asked if he had any guidance for the PIAA as to how many fans should be allowed in the stands this fall. His response sent shockwaves across the state.

“Anytime time people get together it's an opportunity for (COVID-19) to spread,” Wolf said.

He then ended by saying, “The guidance from us, recommendation, is that we don’t do any sports until Jan. 1.”

The comment led to an emergency meeting that afternoon among the PIAA Board of Directors. The roughly 90-minute meeting, held in executive session, didn’t result in any immediate changes, though. The board will again meet Friday, when the PIAA is expected to release an official statement. It’s unclear if any firm decisions on the state of high school sports will come from that meeting, either.

The PIAA tweeted out the following as a news release after Thursday’s meeting: “Today, Governor Wolf issued a statement of strongly recommending no interscholastic and recreational sports until Jan. 1. We are tremendously disappointed in this decision. Our member schools have worked diligently to develop health and safety plans to allow students the safe return to interscholastic athletics.”

Last week, the PIAA voted to approve a 26-page return to competition for the upcoming academic year. That plan provided three options for fall sports programs to follow. Leagues and districts across the state had since responded by choosing one of those options, many of them opting to push back the start of their fall sports practices and games to September, including the Lancaster-Lebanon League.

It’s why Wolf’s comment Thursday led to a panic among school administrators, coaches, parents and student-athletes that high school sports might not be played in 2020. Wolf’s office later sent out a news release to clarify his comment. The release stated, "The Pennsylvania Department of Health and Department of Education today jointly recommended that Pre-K–12 school and recreational youth sports be postponed until at least Jan. 1, 2021, to protect children and teens from COVID-19."

However, the release stated the administration, "is providing this strong recommendation and not an order or mandate,"  and that "school administrators and locally elected school boards should make decisions on sports." 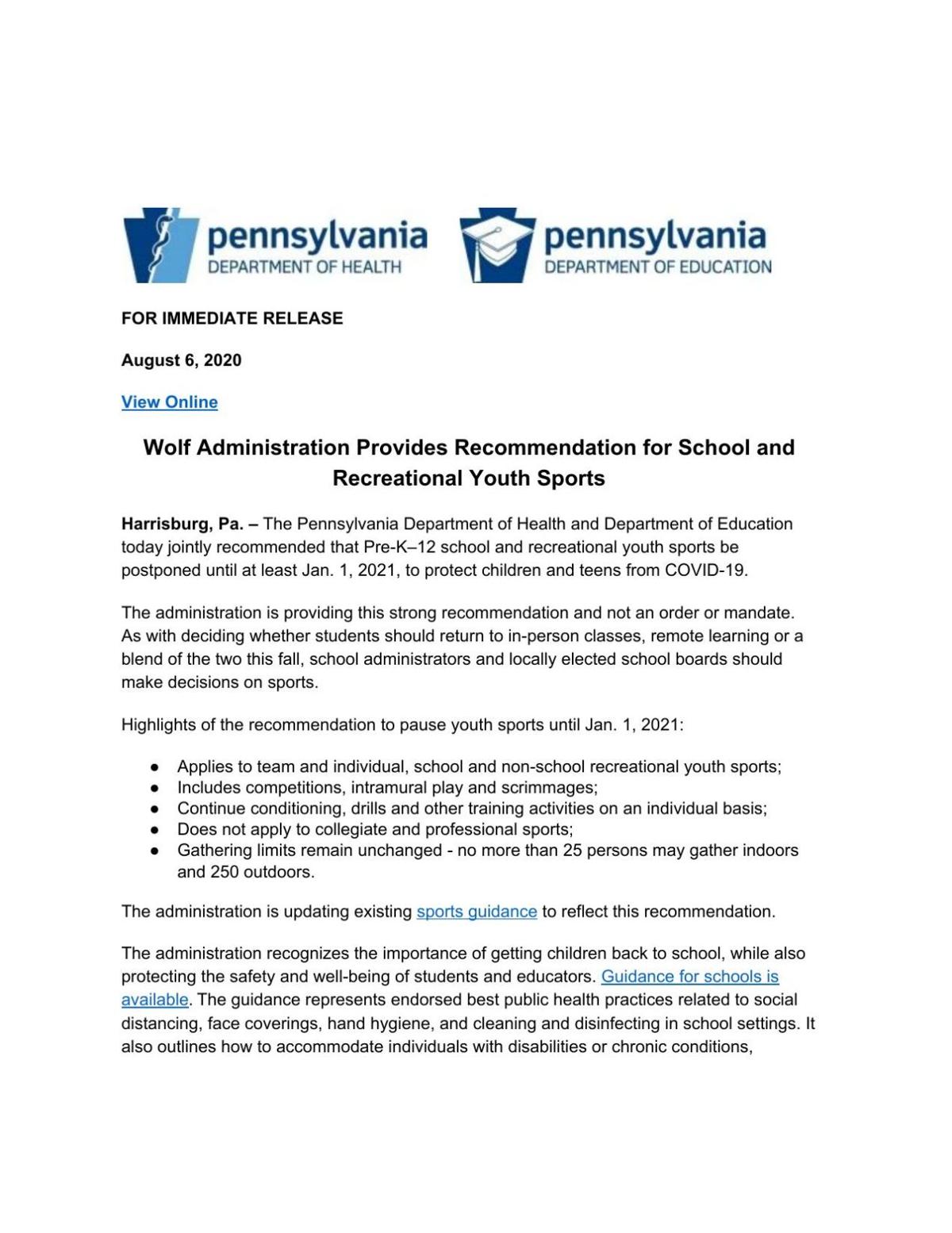 The recommendation led to a rebuke from state Sen. Scott Martin, of Martic Township.

“Sadly, Governor Wolf has once again made a pronouncement at the 11th hour and refused to share the underlying data with the public," Martin said in a press release. "This is, of course, after he entrusted the PIAA and local districts to develop responsible plans that protect the health of our young athletes – something each has been working tirelessly to do."

“...This is, of course, after he entrusted the PIAA and local districts to develop responsible plans that protect the health of our young athletes – something each has been working tirelessly to do.”https://t.co/sqt4XjCwfc

The news also threw a wrench in the plans of the L-L Board of Control, which had planned to finalize its new fall schedules on Thursday, a day after it voted to push back the start of all fall sports, with the L-L golf season slated to start Aug. 17, followed by football heat acclimatization practices Aug. 31, and all the other fall sports practices Sept. 4.

Now, those dates and schedules could be in limbo.

“Personally, it’s been an emotional day,” Bohannon said. “And I’d rather not comment at this time.”

“Everyone needs to digest what happened today,” Bitting said.

Other stories to read

Slowly but surely, local sports are coming back. But with COVID-19 still swirling, for how long?

PIAA committed to starting fall sports on time, but what about Pennsylvania's neighbors?

With fall sports schedules pushed back by COVID-19, L-L League officials are ready to adjust

With no fans allowed at sporting events, L-L League schools figuring out how to live-stream games this fall

Fighting against the structural racism within the educational system amid a global pandemic will take more than one diversity workshop, local …

There are a lot of moving parts currently ongoing when it comes to the state of fall youth sports in Pennsylvania. LNP|LancasterOnline sports …

Dr. Levine: Fall high school sports "not worth the risk"

High school sports aren’t worth the risk this fall, according to the Secretary of the Pennsylvania Department of Health.